West Indies have picked uncapped batsman Johnson Charles and recalled fast bowler Tino Best to the squad for the first three ODIs against Australia in St Vincent in March. 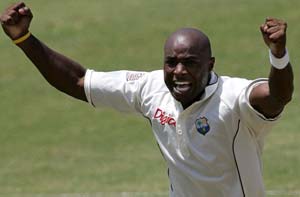 West Indies have picked uncapped batsman Johnson Charles and recalled fast bowler Tino Best to the squad for the first three ODIs against Australia in St Vincent in March. The 13-man squad does not include fast bowler Ravi Rampaul, who is ill, and batsmen Lendl Simmons and Adrian Barath, who have finger injuries.

Dwayne Bravo also returned to the side after being sidelined by an ankle injury, but Fidel Edwards was missing because he is not being considered for ODIs by the WICB. The other exclusions from the side that toured India in December 2011 were batsman Danza Hyatt, legspinner Anthony Martin and offspinner Jason Mohammed.

"Johnson has shown marked improvement in his batting and deserves another opportunity at international level [he has played T20Is]," chairman of the WICB selection panel Clyde Butts said. "Tino, over the last two years, has been very consistent with his performance in the shorter format of the game, and Dwayne looks like he has returned to form and has been consistent, plus his on-field experience will be of value to us."

Charles, a Windward Islands batsman, was picked in the Twenty20 squad for the two matches in England in September 2011 and he made 57 runs with a best of 36. Best's last international appearance was at the ICC Champions Trophy in South Africa in September 2009. Edwards hasn't played an ODI for West Indies since May 2009 either.

"Fidel is being considered for two formats of the game at this time - Tests and Twenty20s," Butts said. "It is all about workload management as we approach a long and demanding schedule of cricket, so we have to handle him with care, considering the injury problems which he has had in the past."

The first ODI against Australia is on March 16.

Comments
Topics mentioned in this article
Michael Clarke Tino Best Australia Cricket Team Dwayne Bravo Brad Haddin Cricket Lendl Simmons Adrian Barath Devon Thomas Ravi Rampaul
Get the latest updates on SA vs IND 2021-22, check out the Schedule and Live Score . Like us on Facebook or follow us on Twitter for more sports updates. You can also download the NDTV Cricket app for Android or iOS.