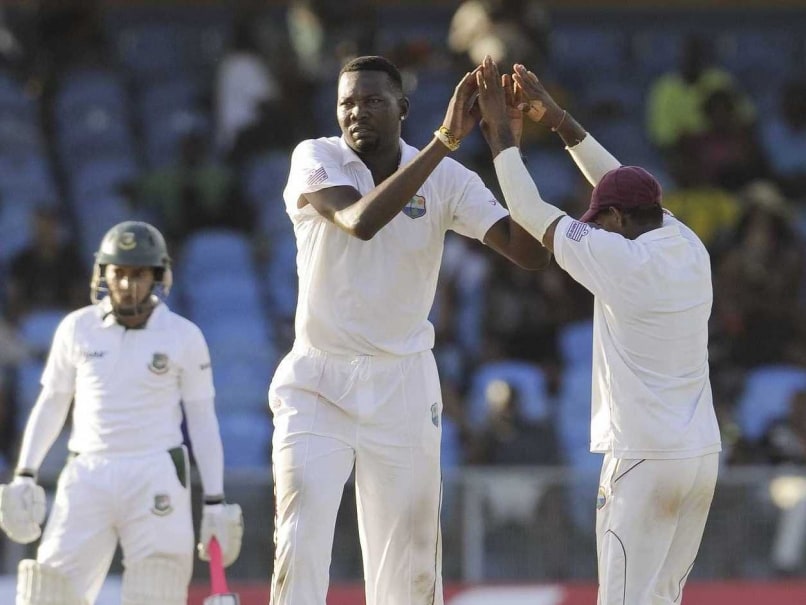 Spinner Sulieman Benn took five wickets and Jerome Taylor reached the milestone of 100 Test wickets as Bangladesh crumbled to a 296-run defeat late on the fourth day of the second and final Test against the West Indies at the Beausejour Stadium on Tuesday. (Scorecard)

Set an improbable target of 489 after the home side declared their second innings at 269 for four, 45 minutes into the day, the tourists crashed from 158 for two to be dismissed for 192 just before a shower swept across the ground.

Opening batsman Tamim Iqbal (64) and Mominul Haque (56) held up the West Indies for over three hours with a second-wicket partnership of 110, but when Tamim skied an attempted sweep off Benn to midwicket it was the trigger for the collapse.

It was completed when Kemar Roach breached the defence of Shafiul Islam to set off the West Indies victory celebrations in their 500th Test and a 2-0 sweep of the series.

"This is unbelievable," said an overjoyed West Indies captain Denesh Ramdin, who waited until senior batsman Shivnarine Chanderpaul completed his 30th Test hundred in the morning before declaring.

"It's a wonderful feeling but we know that there are greater challenges ahead."

Captain Mushfiqur Rahim was the last hope for Bangladesh taking the match into the fifth day after Tamim and Mominul departed.

However he was bowled for the second time in the match, falling to Taylor who then promptly trapped Robiul Islam leg-before to become the 20th West Indian to claim 100 wickets in Test cricket.

"We showed some resistance for a while but that's not good enough," said a crestfallen Mushfiqur.

"We need to play better for longer periods if we want to be competitive going forwards."

Chanderpaul was named Man of the Match while his teammate, opening batsman Kraigg Brathwaite, took the Man of the Series honours.

Following unbeaten innings of 85 and 84 previously in the series, Chanderpaul's unbeaten 101, together with 66 not out from Jermaine Blackwood, allowed Ramdin to close his side's innings inside the first hour.

Bangladesh got off to a flying start in the 15 overs they faced to the interval, Shamsur Rahman taking on Taylor and hooking the fast bowler for successive sixes over square-leg.

Taylor had the last laugh however when, in attempting to repeat the shot, Shamsur found Kirk Edwards on the square-leg boundary and departed for 39.

Benn, 33, then removed new batsman Anamul Haque to a catch at the wicket but Mominul displayed admirable discipline and dedication alongside Tamim, only for all their good work to be in vain when they fell to the left-arm spinner.

Comments
Topics mentioned in this article
West Indies Cricket Team Bangladesh Cricket Team Shivnarine Chanderpaul Sulieman Benn Cricket
Get the latest updates on IPL Auction 2023 and check out  IPL 2023 and Live Cricket Score. Like us on Facebook or follow us on Twitter for more sports updates. You can also download the NDTV Cricket app for Android or iOS.