Watch: How Marnus Labuschagne Is Preparing To Bat On Spin-friendly Pitches

Prolific Australian batter Marnus Labuschagne provided a sneak peak into how he is using backyard contraption to prepare for the spinning tracks expected to be laid out during Australia's upcoming tour of Pakistan. 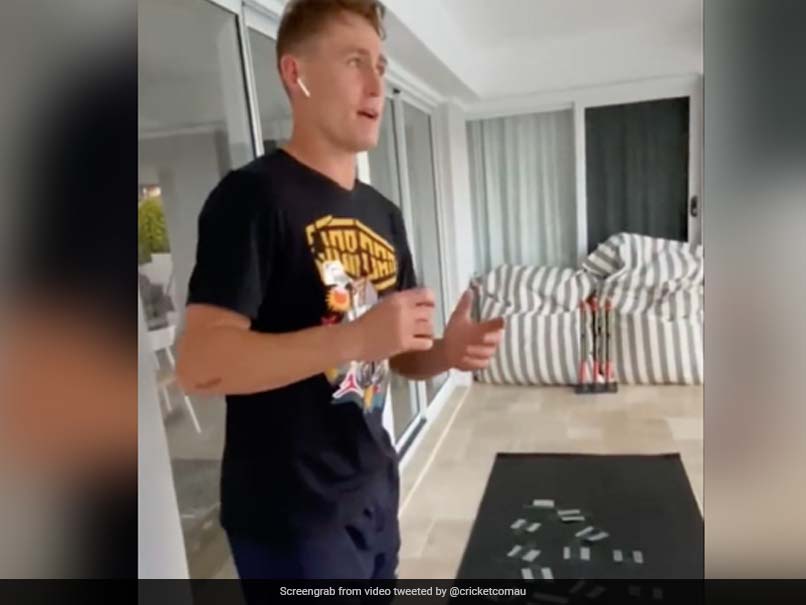 Marnus Labuschagne shared a video of his backyard contraption.© Twitter

Australia's Marnus Labuschagne shared a video on Twitter where he is seen playing in his home backyard where he recreated a surface akin to spin-driendly pitches in the sub-continent. Labuschange will soon be on the flight to Pakistan, where Australia will be playing a Test series after more than two decades. The video shows a rubber mat with aluminum and metal sheets taped to it that is cut into pieces in order to replicate the cracks that appear on the subcontinent pitches as the game proceeds. "Originally I had bigger sheets on there," Labuschagne told reporters in Brisbane on Monday. Labuschagne also revealed his chat with Steve Smith and the latter's inputs that proved valuable for recreating such a pitch.

"Then I was actually on the phone to Steve and he was like 'Nah, nah, nah, that's no good'. You've got to actually cut the pieces up so they're small pieces so you can't really predict at all what the wicket is going to do," he added.

"So, I cut them up in smaller pieces, put them around and tried to line it up so that if one hit the aluminum or the metal it would skid on and hit the stumps ... then one would spin," he said.

"One of the big factors when you go to England is that the ball hits the stumps from a shorter length," said Labuschagne.

"A little bit of a similar thing, going to Pakistan. I thought, 'What's the best way I can recreate spin?' But not just consistent spin because I think that's quite easy to recreate - you get a mat - but inconsistent (spin) so some spin, some slide," Labuschagne explained.

In the end of the video, Labuschagne brought out the "fun" factor that is associated with such a scenario which goes on well along with some serious training.

"It's always fun - you get a few of the boys around and you play in the backyard. So it's enjoyable and training. It's a really exciting challenge to go over there," said Labuschagne.

Australia are set to play three Test, three ODIs and a single T20I between March 4 to April 5.

Squads for Australia's tour of Pakistan:

Australia Cricket Team Marnus Labuschagne Cricket
Get the latest updates on ICC T20 Worldcup 2022, check out the Schedule and Live Score. Like us on Facebook or follow us on Twitter for more sports updates. You can also download the NDTV Cricket app for Android or iOS.