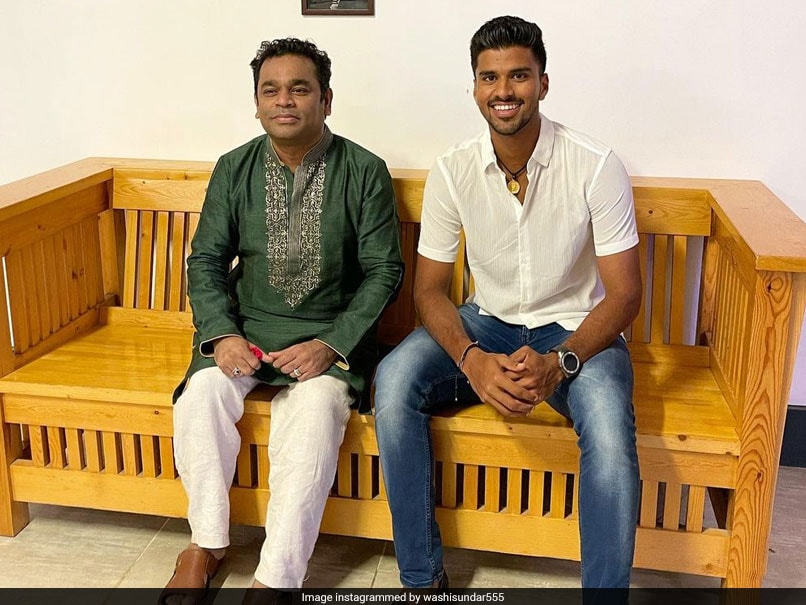 Washington Sundartook to social media to share a couple of pictures of himself with music maestro AR Rahman. Sundar, who is gearing up for the upcoming Test series against England, captioned the pictures as "To a blissful evening." Sundar made his Test debut in the recently-concluded series in Australia. The India all-rounder impressed one and all in his first Test match. He picked up four wickets and scored 84 runs, including a half-century in the first innings, that helped India beat Australia by three wickets in Brisbane and clinch the four-match series 2-1.

To a blissful evening! pic.twitter.com/wz9KFTEVUy

Sundar, who became the 301st Test cricketer for India as he took the field at The Gabba, had posted a picture with his father on Sunday, flaunting his Test cap.

Sundar, inspired by Team India head coach Ravi Shastri, expressed his desire to one day open the batting for the country in Test cricket.

"I think it will be a blessing for me if I ever get an opportunity to open the batting for India in Tests. I think I will accept the challenge just like our coach Ravi sir did during his playing days," Washington had said.

In the Brisbane Test, India were in danger of conceding a big first innings deficit after being reduced to 186 for 6, in reply to Australia's 369.

Sundar and Thakur hit half-centuries as the duo put on a vital 123-run stand for the seventh wicket to bail India out of trouble in the first innings and help the visitors script a memorable series win Down Under.

Australia Cricket Team Washington Sundar Cricket Australia vs India 2020-21
Get the latest updates on IPL 2021, check out the IPL 2021 Schedule and Indian Premier League Live Score . Like us on Facebook or follow us on Twitter for more sports updates. You can also download the NDTV Cricket app for Android or iOS.