Opener Vusi Sibanda reached his second one-day international century off the last ball of the game to lead Zimbabwe to a seven-wicket win and a series victory over Bangladesh on Wednesday. 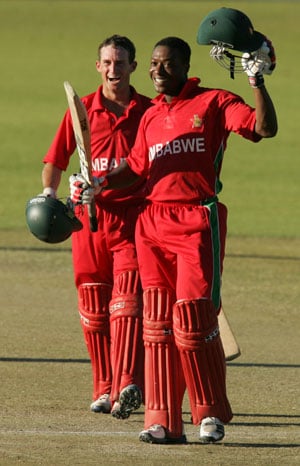 Opener Vusi Sibanda reached his first one-day international century in seven years with the match-winning shot as Zimbabwe beat Bangladesh by seven wickets for a series victory in the deciding game on Wednesday.

Sibanda's 103 not out took Zimbabwe to 251-3 and past Bangladesh's 247-9 with 17 balls to spare at Queens Sports Club, giving the home team a 2-1 series win. Zimbabwe's successive victories after trailing in the ODI series finally separated the two teams after their drawn test series.

Sibanda, who made one century in his 102 previous matches, hit nine fours and two sixes to lead Zimbabwe's chase with the help of Sean Williams, who was 55 not out.

With Sibanda on 99 and Zimbabwe one run short of victory, Williams held himself back and didn't score any runs off the final five balls of the 47th over to allow Sibanda to hit the winning runs and reach his first ODI hundred since a maiden ton in 2006.

The batsman also has four one-day scores in the 90s. He clinched the series for Zimbabwe with a thick outside edge down to the third-man boundary after Williams' generous play.

It was also Williams' second straight half-century after he won the second game for Zimbabwe.

The in-form Nasir Hossain (63) and Mahmudullah (75 not out) earlier made half-centuries in Bangladesh's total. Seamers Kyle Jarvis, Brian Vitori and Tendai Chatara took two wickets each for Zimbabwe.

Zimbabwe's batsmen were in control from the start of the chase, which was anchored by Sibanda as he combined for half-century partnerships with Hamilton Masakadza and Sikandar Raza and an unbeaten 109-run stand with Williams.

Comments
Topics mentioned in this article
Cricket Vusi Sibanda Zimbabwe Cricket Team Bangladesh Cricket Team
Get the latest updates on ICC T20 Worldcup 2022 and CWG 2022 check out the Schedule, Live Score and Medals Tally. Like us on Facebook or follow us on Twitter for more sports updates. You can also download the NDTV Cricket app for Android or iOS.