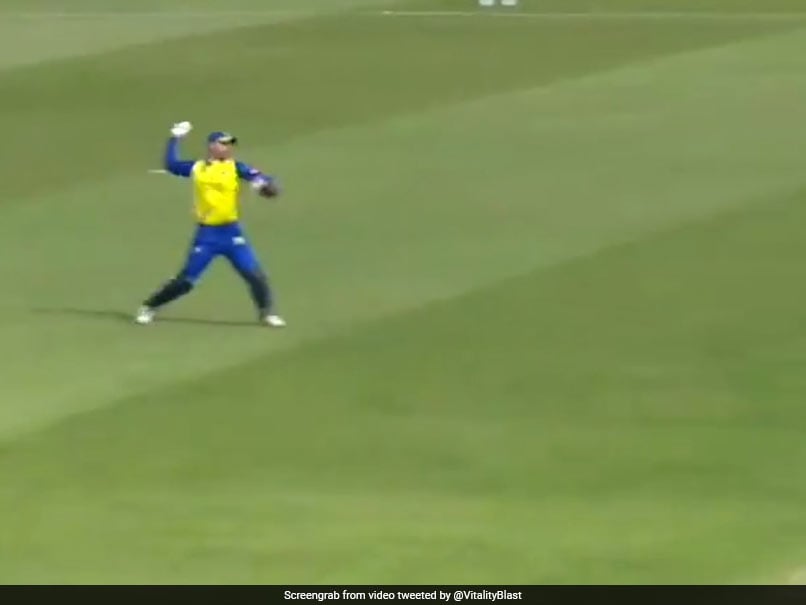 David Bedingham fired in a quick throw, after fumbling the ball initially.© Twitter

Leicestershire skipper Colin Ackermann was forced to walk back early to the pavilion, following an excellent throw by opposition wicketkeeper David Bedingham in England's T20 league, the Vitality Blast. The dismissal was captured in a video posted on Twitter by the league's official handle. "Incredible arm for this run out by David Bedingham. Would you have tried to take a single there?" the caption on the post read. Ackermann attempted a quick single, after missing the ball with Bedingham fumbling initially. However, the wicketkeeper soon recovered composure firing in a quick throw, with the ball going on to hit the stumps before the batsman could make the crease. This was followed by celebrations from the fielding side.

Incredible arm for this run out by David Bedingham

Would you have tried to take a single there?

Leicestershire managed to score 132, batting first, but Durham chased down the target comfortably to record a six-wicket win, with over four overs to spare.

The Vitality Blast is one of the few tournaments being currently held, in a world which has been badly hit by the coronavirus pandemic.

Several major events like the T20 World Cup have been postponed, due to COVID-19 resulting in chaos.

However, there have been attempts made to keep the game alive despite the pandemic, with tournaments like the 13th edition of the Indian Premier League (IPL) scheduled to be held in the United Arab Emirates (UAE) from September 19.

IPL 2020 was earlier scheduled to be held in India, before being moved to the UAE due to the rising coronavirus cases.

Defending champions Mumbai Indians (MI) will take on Chennai Super Kings (CSK) in the opening match of the edition.