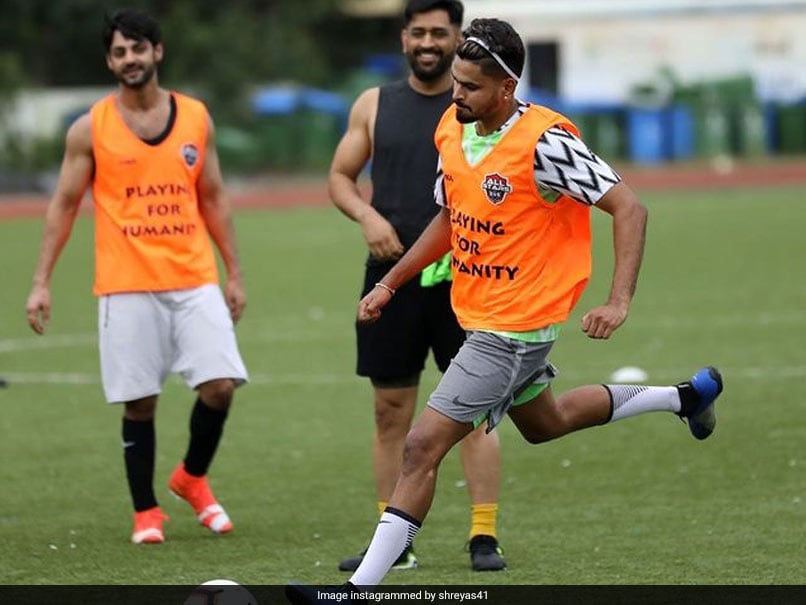 Shreyas Iyer shared pictures from a football game that featured MS Dhoni and Ranveer Singh among others.© Instagram

Cricketer Shreyas Iyer on Tuesday shared pictures from a football match with a star-studded cast that included former India captain MS Dhoni and Bollywood star Ranveer Singh. "Ballin' with these ballers," Iyer captioned the post on Instagram. Current India skipper Virat Kohli - whose love for football is well documented - was quick to respond, making it clear he wanted to be part of the fun the next time around. "Count me in next time we're in town," Kohli wrote on Iyer's post with a fire emoji.

"Nice Gary," he wrote, with some applauding emojis.

Iyer recently recovered from a shoulder injury that he suffered during India's ODI series against England in March.

While Iyer was initially ruled out of the 2021 season of the Indian Premier League (IPL), the Covid-enforced suspension of the tournament means he will be back for Delhi Capitals (DC) when it resumes on September 19 in the United Arab Emirates (UAE).

Suspended in May, IPL 2021 will get underway again on September 19 with defending champions Mumbai Indians taking on Chennai Super Kings in Dubai.

DC, playing under Rishabh Pant's captaincy in Iyer's absence, were top of the points table when the tournament was abruptly halted, with 12 points from 8 matches.