Virat Kohli Is No.1 In The World, I Shouldn't Be Compared To Him: Babar Azam 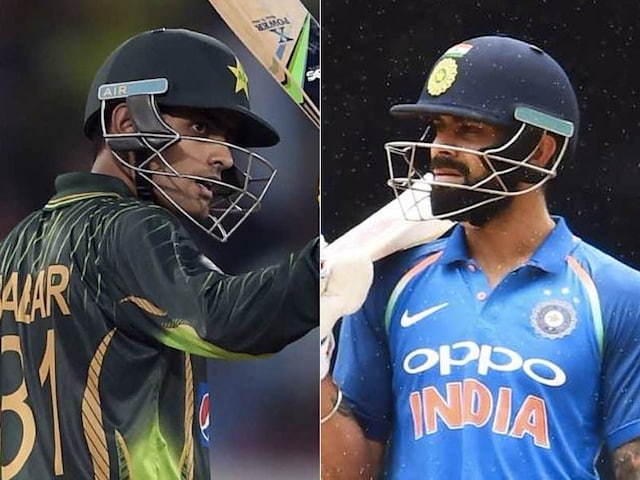 Virat Kohli's performance in recent years across all formats has taken him to the top echelons of world cricket. The Indian skipper's stats are often used to compare other cricketers from around the globe. In recent times, Steve Smith, Joe Root and Kane Richardson have been the three batsmen that have been consistently compared to the Indian run-machine. However, across the Indian border is another rising star -- Babar Azam, whose recent performances have led to him being likened to Kohli. But the Pakistan batsman is having none of it.

Last year, Pakistan's coach Mickey Arthur compared Azam to Kohli, saying the 23-year-old reminds him of the India skipper at the same age.

However, in an interview to ESPNCricinfo, Azam said he shouldn't be compared to such a "big player" and claimed that Kohli is "the No.1 batsman in the world".

"He compared me with a very big player. I think it shouldn't be done. But that is the coach's thinking. Maybe the stats at the start of our careers are similar, but he is the No.1 batsman in the world. I want to perform at a high level for Pakistan too," said Azam.

The Pakistan batsman said that in his early years, he use to follow South African sensation AB de Villiers and tried to copy him. But he revealed that nowadays he follows Kohli, Hashim Amla.

"I loved watching AB de Villiers in the early days. I used to follow him closely. I copied him a lot too. In the nets, I used to at least try some of the shots he played in the matches. Those hadn't been played back then. I still don't try those shots. I play normally. Nowadays I follow Virat Kohli, Hashim Amla, and of course, de Villiers," said Azam.

The stylish right-hander has played 36 ODIs so far in his career, scoring 1,758 runs at an average of 58.60. He has seven half-centuries and seven hundreds to his name.

Comments
Topics mentioned in this article
India Cricket Team Sri Lanka Cricket Team Babar Azam Virat Kohli AB de Villiers Cricket
Get the latest updates on IPL 2020, check out the IPL Schedule for 2020 and Indian Premier League (IPL) Cricket live score . Like us on Facebook or follow us on Twitter for more sports updates. You can also download the NDTV Cricket app for Android or iOS.