Virat Kohli won the Polly Umrigar Trophy for Cricketer of the Year while Syed Kirmani was awarded the Col CK Nayudu lifetime achievement award in the BCCI Awards function held in Mumbai. 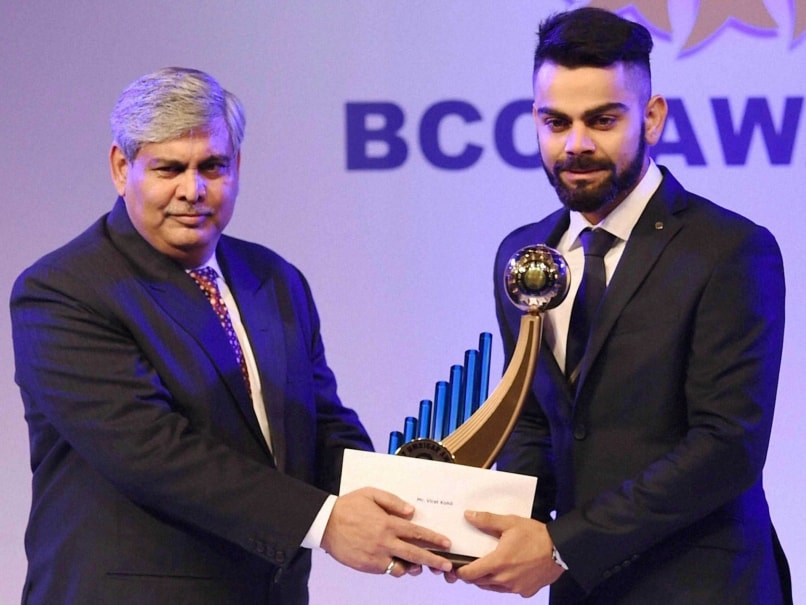 Virat Kohli has won the Polly Umrigar Trophy for Indian cricketer of the year in the BCCI Awards function.© PTI

The 66-year-old former India cricketer and member of the 1983 World Cup-winning squad was presented the award by BCCI president president Shashank Manohar at the Cricket Board's annual awards (2014-15 season) ceremony.

The coveted Polly Umrigar award was also handed over to Kohli by Manohar. The Indian Test skipper, who has won two consecutive bilateral series against Sri Lanka and South Africa, took to twitter to express his happiness.

Polly Umrigar award for the 2nd time Thank You @BCCI for finding me worthy of the award. Feeling humbled & grateful pic.twitter.com/mfAbQpDfJr

Kirmani, who was also given the award of citation, trophy and Rs 25 lakh, took a mild dig at modern wicketkeepers when asked about the difference from his time to the present day.

"These days it's not about wicket keeping techniques but just about producing results. Dhoni has been able to do it," he said before praising the limited overs skipper, who was in the audience and grinning: "Good job, Dhoni."

"The only thing in my mind when playing was to do well and keep the tri colour flying. I thank the BCCI for honouring me with the C K Nayudu Lifetime Achievement Award."

Kirmani, who was understudy to Farokh Engineer on successive visits to England in 1971 and 1974 before taking over as the no.1 gloveman, effected 198 dismissals in 88 Tests during the latter period of the famous Indian spin quartet.

"I am proud to have kept wickets to the three spin legends - Erapalli Prasanna, B S Chandrasekar and Bishen Bedi," he remarked over his career.

Kohli said that the greatest moment of his career so far is the Test series in Australia, which India lost 0-2, but not before giving a tough fight to the hosts.

Â "It is important to start the year well and we were able to do so in Australia. I compliment the entire team. It was the greatest moment of my career so far and would probably remain so," he said.

Referring to the great chase the team made in Adelaide before falling short narrowly, Kohli said, "Some days you bat like a man possessed. All I had in my head was the target of 367," he said.

Talking about the knock of 107 against Pakistan in the subsequent World Cup, the Delhi stalwart said that on the morning of the match when he woke up he saw 3000 people on the bridge that connected the hotel to the stadium with musical instruments and flags.

"There was such a frenzy and it struck me that I am going to play in front of these guys in three hours. I challenged myself to do it and I was able to do it," Kohli remarked.

Kirmani appeared in 49 ODIs and played a crucial role in the do-or-die World Cup match against Zimbabwe at Turnbridge Wells by putting on a century partnership with captain Kapil Dev to rescue the team from a precarious 17 for five.

After his playing career, Kirmani served as chief selector and was a vice-president of the Karnataka State Cricket Association (KSCA).

Karnataka State Cricket Association won the best state association of the year honour for achieving the treble of winning the Ranji Trophy, Irani Cup and Vijay Hazare Trophy in the 2014-15 season.

Polly Umrigar Award (for Cricketer of the Year): Virat Kohli

Comments
Topics mentioned in this article
Virat Kohli Syed Mujtaba Hussein Kirmani Cricket
Get the latest updates on ICC T20 Worldcup 2022, check out the Schedule and Live Score. Like us on Facebook or follow us on Twitter for more sports updates. You can also download the NDTV Cricket app for Android or iOS.