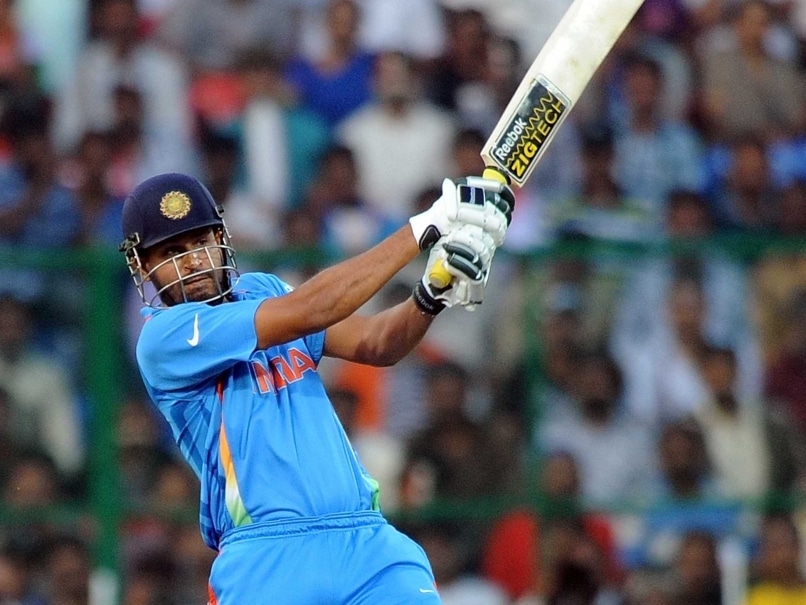 Yusuf Pathan blasted Baroda to victory over Andhra while Mahendra Singh Dhoni's top score of 44 could not save Jharkhand.© AFP

Mahendra Singh Dhoni showed glimpses of his form but Jharkhand still could not manage a victory against Gujarat in the 2015/16 Vijay Hazare Trophy. Yusuf Pathan's blitz allowed Baroda to thrash Andhra while Tamil Nadu registered their second win. Here is a wrap of all the action on day two of the the Vijay Hazare Trophy. (Latest Cricket News)

Skipper Ambati Rayudu faltered for 1, Deepak Hooda (53) and Yusuf Pathan (46 not out) rallied hard to make it count for the side which had lost their first game against Delhi.

Yusuf's 36-ball knock provided the much-needed entertainment in the slog overs as the hard-hitter smashed 2 fours and 2 sixes.

With this win, Tamil Nadu now have eight points

Karnataka Bounce Back Against Haryana

Karnataka produced an all-round performance to get the better of Haryana by 38 runs in their second match of the Vijay Hazare Trophy. Put in to bat, Karnataka posted 242 for nine in their allotted 50 overs and then bundled out Haryana for 204 in 46.3 overs.

Rajat Bhatia bagged a five-wicket haul and then hit an unbeaten 68 to help Rajasthan steal a one-wicket win against Assam in a thrilling Group A Vijay Hazare cricket match here today.

Chasing 149 for a win in a low-scoring encounter at the Railways Recreation Club Ground, Rajasthan were reduced to 81 for seven and then 139 for nine but Bhatia held his nerve in a tense finish to hand Assam their second loss in two days.

Punjab scored 238 all out in 49.4 overs with Mayank Sidhana top-scoring with a 66-ball 64 and then their bowlers, led by Kaul (5/32), restricted Hyderabad to 182 for 9 in 42.4 overs to win the match at the Rajiv Gandhi International Stadium.

Mahendra Singh Dhoni Comes Back to Form, but Jharkhand Lose to Gujarat

Mahendra Singh Dhoni top-scored with a defiant 44 but his innings went in vain as Jharkhand lost to Gujarat by six wickets in the Group B League match of Vijay Hazare Trophy here today.

Electing to bat at the KSCA Cricket (3) Ground, Jharkhand scored 177 for four in 47 overs but could not stop Gujarat from running away with an easy win.

An all-round display by Shrikant Mundhe helped Maharashtra register a 40-run victory over Odisha in their Group C match of the Vijay Hazare Trophy.

Prashant Chopra (91), Robin Bist (84) and Paras Dogra (78) struck half centuries as Himachal Pradesh handed a crushing 89-run defeat on Bengal. Himachal Pradesh piled up a big total of 308 for seven and then bundled out Bengal for 219 off 36.3 overs at Madhavrao Scindia Cricket Ground.

Put into bat, the home side, despite losing three quick wickets, amassed 340 for 5, thanks to the efforts of Jackson (111), Jadeja (134) and Chirag Jani (77 not out), who made merry against MP bowlers in the Group D match at SCA Stadium in Khandheri.

Saurashtra then bowled Madhya Pradesh out for 333 in 49.1 overs to notch up an exciting victory.

Opener Faiz Fazal struck a defiant half-century before the visiting bowlers made it count to help Vidarbha beat Delhi by 18 runs.

Vidarbha rode on Fazal's 83 to post 163 all out in 45.2 overs -- a score which proved challenging in the low-scoring encounter.

Delhi pacer Ishant Sharma bowled his heart out to return with impressive figures of 5-21 and his effort was backed up by Navdeep Amardeep Saini and Subodh Bhati, who bagged two wickets each.

Chasing in what seemed an easy target for the star-studded line-up, Delhi faltered against a disciplined bowling attack led by pace spearhead Umesh Yadav.

Comments
Topics mentioned in this article
JHA BAR GUJ Yusuf Pathan MS Dhoni Ishant Sharma Cricket
Get the latest updates on IPL 2021, IPL Points Table , IPL Schedule 2021 , live score . Like us on Facebook or follow us on Twitter for more sports updates. You can also download the NDTV Cricket app for Android or iOS.