West Indies lift their maiden ICC U19 World Cup after beating India in a low-scoring final in Mirpur. Catch all highlights of the match here 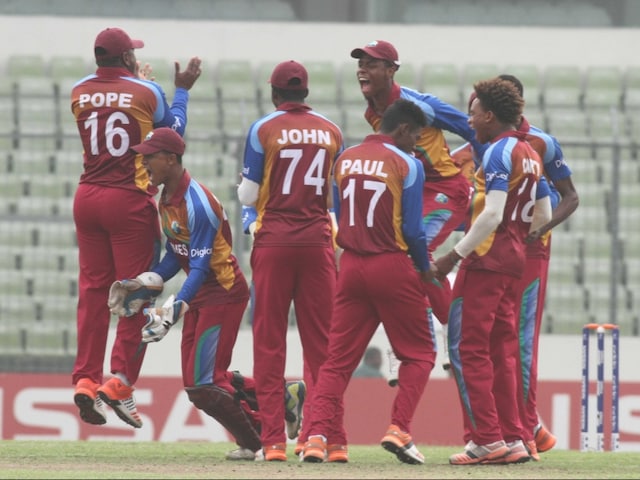 West Indies beat India by five wickets in a low-scoring thriller in Mirpur to win the 2016 ICC U19 World Cup. Catch all the highlights here.Â (NEWS | PHOTOS)

Shimron Hetmyer: We weren't supposed to be champions but we came up to top. The pacers used the pitch to their advantage, they stood out for us. Carty and Paul are aggressive players, they made the adjustment. They kept a calm head.

Ishan Kishan: The bowlers bowled in the right areas. In fielding, we were good in the beginning, but we dropped crucial catches today. It was difficult to bat, but we were used to these conditions.

Man of the Match Keacy Carty: It was very enjoyable. We performed very well. It is a very good feeling. I told myself that I can't leave the Under-19 World Cup without a landmark. We work together, we hope to take West Indies back on top where we were.

Congratulations to the West Indies U19 on winning the #U19CWC ???? #FutureStars #Champions ???? #Brilliant

1550 hrs IST: That's that! West Indies are world champions of Under-19 cricket. Keacy Carty (52*) and Keemo Paul (40*) held their nerves to put on 69 runs for the sixth wicket to guide West Indies to their maiden U19 World Cup title.

1521 hrs IST: Keacy Carty and Keemo Paul have added 40 runs for the sixth wicket to put West Indies back in the game. India will have to work a lot harder and hope for a miracle to happen. Windies look favourites to win now.

Game is on ??well bowled Dagar we can win from here now #ICCU19CWC

1428 hrs IST: WICKET! Mayank Dagar is spinning a web around West Indies for sure. Jyd Goolie is caught and bowled by Dagar for three and West Indies have lost their fifth wicket. West Indies 77/5 in 28.5 overs.

What a spell from Mayank Dagar??Love the way he is fighting the ball & forcing the batsmen to play big shots????Keep it up?? @BCCI #Under19cwc

1418 hrs IST: WICKET! Mayank Dagar gets the dancer. Shamar Springer gets on his knees and skies it straight to Armaan Jaffer at long off. India certainly back in the game. West Indies 71/4 in 26.1 overs.

And they get one! Dagar removes Hetmyer!

1408 hrs IST: WICKET! Mayank Dagar breaks 39-run stand as he gets skipper Shimron Hetmyer for 23. The captain goes down the track and plays it straight to long on. West Indies 67/3 in 23 overs.

1350 hrs IST:Â West Indies have found runs tough to comeby, but still they have hung in there in a low run chase.Â Shimron Hetmyer, Keacy Carty have steadied the ship with a 25-run stand to ensure West Indies cross the 50-run mark. West Indies 53/2 after 18 overs. Â

1341 hrs IST: Meanwhile in senior level cricket, South Africa have won the toss and they will bowl first against England in the series deciding fifth ODI in Cape Town.

1307 hrs IST: WICKET! Khaleel Ahmed joins the party. Indian seamers are fighting hard and run scoring will not be easy for West Indies. Tevin Imlach is undone by bounce here as plays straight to short cover where Lomror completes the catch. West Indies 28/2 in 7.3 overs.

This is the trophy that India and West Indies are playing for here at #U19CWC#FutureStars pic.twitter.com/5btSxHXyDq

1244 hrs IST: WICKET! Avesh Khan continues with his superb form as he gets opener Gidron Pope in his second over. Pope miscuse pull to Khaleel Ahmed at third man. Just the kind of start wanted. West Indies 5/1 in 2.5 overs

1204 hrs IST: That's it! India have been bundled out for 145 in 45.1 overs. Rahul Batham made a useful 21 before he was dismissed by Keemo Paul. Sarfaraz Khan top scored with 51 as he slammed his fifth fifty of the tournament. Alzarri Joseph and Ryan John picked up three wickets each while Keemo Paul got two. 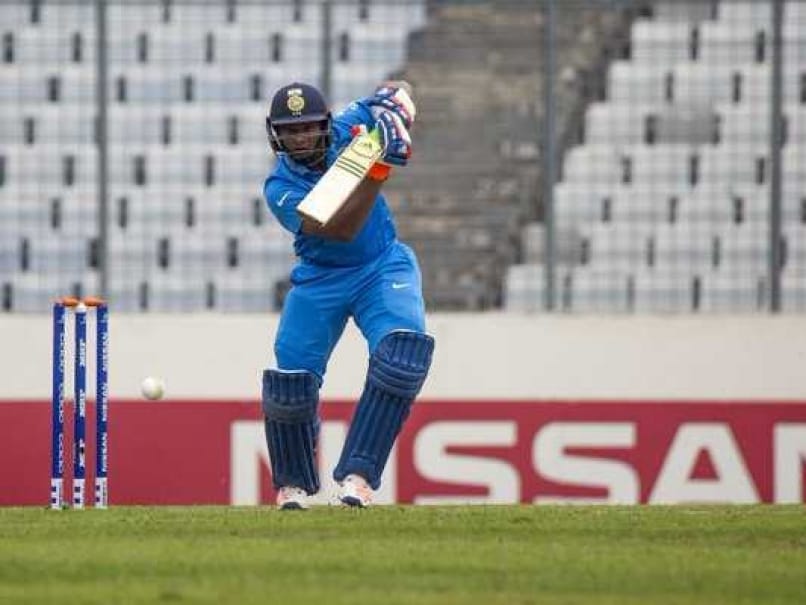 Sarfaraz Khan hit five fours and a six during his fighting knock. (Image was tweeted by @ICC)

1135 hrs IST: WICKET! Sarfaraz Khan departs after scoring 51 off 89 balls. What an important knock he played. He survived the testing period and lacked support from the other end. His fighting knock is ended by Rayn John, who pocketed his third wicket.

1121 hrs IST: FIFTY! Sarfaraz Khan slams his fifth fifty in the tournament. He is playing a crucial knock but lacks support from the other end. India 115/6 in 35.1 overs.

1054 hrs IST: WICKET! Mahipal Lomror departs after scoring 19. Lomror looks to work it down to third man but ends up edging it to keeper Imlach off Chemar Holder. A growing 37-run stand is also broken. India 87/6 in 29.1 oevrs.

0959 hrs IST: WICKET! Armaan Jaffer departs for five. Sheemar Springer gets he wicket in his first over. Armaan gets forward and plays an uppish drive that goes straight to Keemo Paul at short cover. India 50/5 in 17.2 overs.

0945 hrs IST: WICKET! Another one bites the dust. Washington Sundar, who faced 41 balls for his 7, always looked in control before playing a lose shot to Alzarri Joseph at mid off. India lose their fourth wicket. What a start it has been for West Indies young guns. Ryan John gets his first wicket. India 41/4 in 14.5 overs 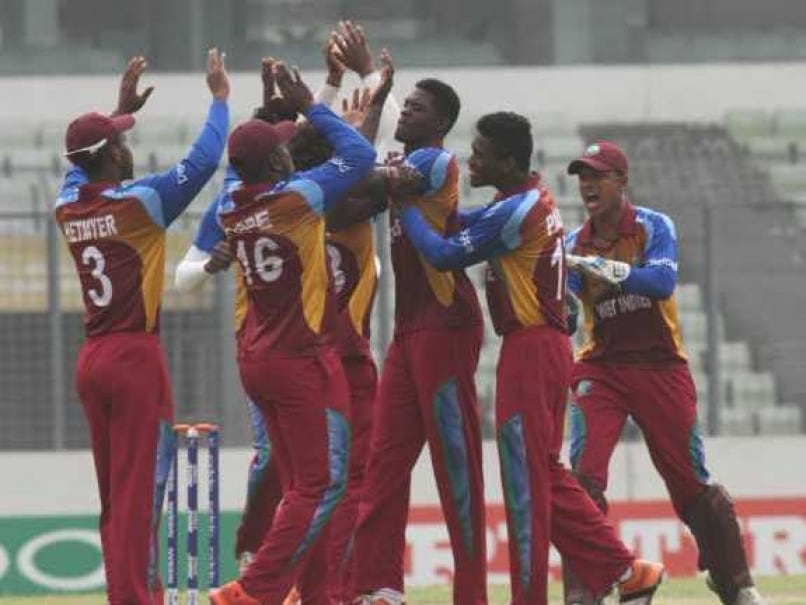 0905 hrs IST: WICKET! India are in massive trouble now as captain Ishan Kishan too departs cheaply. Ishan goes across the line and is struck on pads. Alzarri Joseph gets his third.

0850 hrs IST: WICKET! Not the kind of start India would have wanted. Anmolpreet Singh edges a bouncy delivery to keeper Imlach and India lose their second wicket. Alzarri Joseph get the wicket. India 8/2 in 2.3 overs

0839 hrs IST: WICKET! India suffer blow in the first over. In-form Rishabh Pant is stumped by wicketkeeper Tevin Imlach for 1. Imlach shows great awareness as he finds Pant standing outside the crease after the ball was delivered. 3/1 (0.4 overs)

West Indies have WON the toss and will BOWL first here in Dhaka #U19CWC #FutureStars pic.twitter.com/NBPB2shGfc

0803 hrs IST: TOSS! West Indies have won the toss and they will bowl first. India happy to bat first.

Good Morning from the final of #U19CWC where we see West Indies show down v India.
Who will triumph?#FutureStars pic.twitter.com/ErWpjevKWN 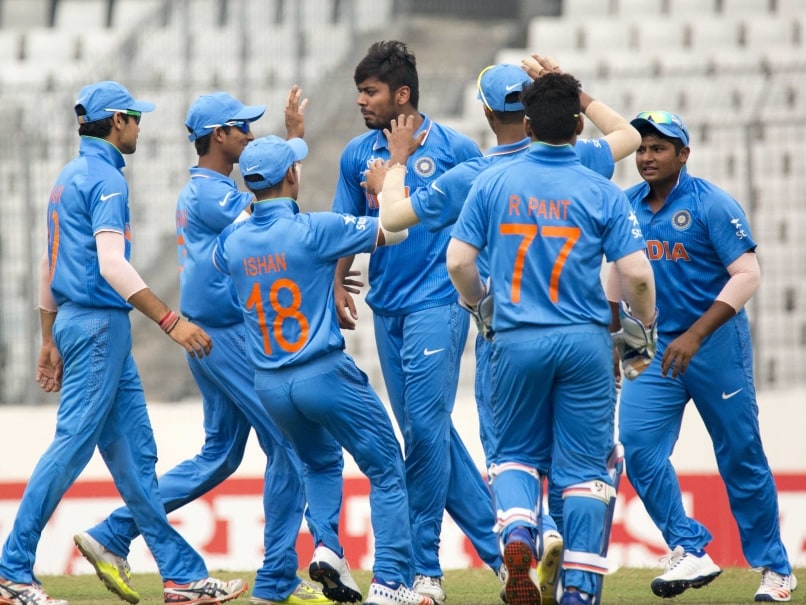 India's Avesh Khan has been one of the best players in the Under 19 World Cup.

Rahul Dravid's contribution to Indian cricket is immense. The amount of runs he has scored in both Tests and one-day internationals, combined with the milestones that he has accumulated, make him one of the greats. However, there is one thing missing in Dravid's stellar career and that is a World Cup win. On February 14, he is one win away from adding a World Cup trophy to his stellar list of achievements.

India's performance in this edition has been dominant. They have clicked in all departments and there have been no weaknesses in the team. The batting, bowling and fielding have all clicked as a unit. At the top, Rishabh Pant, who smashed the fastest fifty in Under-19 cricket against Nepal, has provided the necessary firepower. In the middle order, Sarfaraz Khan and Washington Sundar have provided stability. With the ball, Avesh Khan with 11 wickets has been the pick of the bowlers while the likes of Mahipal Lomror have been a revelation.

The team has won 15 consecutive matches and skipper Ishan Kishan now stands on the cusp of winning the Under-19 World Cup for the fourth time, which will be the most by any team. He has a chance to join the likes of Mohammad Kaif, Virat Kohli and Unmukt Chand as the other World Cup winning skippers for India.

West Indies Should Not Be Taken Lightly

Few would have thought West Indies would be in this situation after their loss in the opening match to England. However, with some gritty performances have seen the boys from the Caribbean dance their way to the final.

Shamar Springer has epitomised the cavalier nature of the West Indies cricket team in this tournament. His celebratory dances have been the talk of town, but his energy and skills have served the team well. The likes of skipper Shimron Hetmyer and Gidron Pope, two power hitters have served the batting well.

With the ball, Alzarri Jospeh has grabbed the attention of analysts with his 90-mph speed. Speaking just before the final, former West Indies player Ian Bishop said, "The kids have done better than I thought they would have. I wouldn't say they were as prepared as they could have been. So to get to the final... I think it will encourage a lot of West Indian supporters. It also give a glimpse that West Indies do have talents, if not as much as before."

A win for West Indies will go a long way to revive interest in the game back home. They would be desperate to overcome the tragedy of 2004 at the same venue, when they lost the final by 25 runs to Pakistan.

Comments
Topics mentioned in this article
Cricket Ishan Kishan Live Cricket Score Live Blogs Rishabh Pant
Get the latest Cricket news, check out the India cricket schedule, Cricket live score . Like us on Facebook or follow us on Twitter for more sports updates. You can also download the NDTV Cricket app for Android or iOS.