A plethora of personalities from across all spheres of life including, of course, the gentleman's game, hit the right superlatives for the "undisputed champion of cricket", who held the nation in his thrall for the past 24 years. 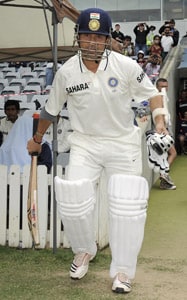 From the well-known to unknown, twitter-world on Thursday had them all as glowing tributes poured in thick and fast with the breaking, or, rather 'heart-breaking', news of Sachin Tendulkar deciding to call it quits after recording another double -- playing in his 200th Test.

A plethora of personalities from across all spheres of life including, of course, the gentleman's game, hit the right superlatives for the "undisputed champion of cricket", who held the nation in his thrall for the past 24 years.

British cricket journalist Nick Hoult was also among the many to have left a post for the Mumbaikar.

"Tendulkar announces he will retire after his 200th Test. A nation goes into mourning," tweeted Hoult.

The 40-year-old great announced his decision to retire from Test cricket after playing his landmark 200th match against the West Indies next month, bringing an end to the intense speculation about his future.

As expected, there was a mad rush of netizens taking to the social networking site just moments after the news was made public.

"Not being able to play alongside him or not seeing him play in d future sounds scary #SachinTendulkar," wrote India seamer Irfan Pathan.

England captain Eoin Morgan wrote, "Sad to hear the greatest ever batsman is calling it a day. One man who inspired a nation #Sachin."

Not left behind was former England captain Michael Vaughan.

"One of the Greatest ever @sachin_rt is retiring... One of my heroes and a absolute joy to play against," Vaughan tweeted.

Cricket Australia issued a statement, calling him the most prolific run-scorer.

"Cricket's most prolific run-scorer, Sachin Tendulkar, will retire after his 200th Test next month," CA said in the statement.

Former India batsman and cricket expert, Sanjay Manjrekar wrote: "Privileged to have seen a child prodigy go on to become a true legend of the game from very close quarters. All the best Sachin."

Tendulkar, who has not been in the best of form in recent times, has informed the BCCI about his decision to quit Test cricket after a glorious career spanning more than two decades.

Former IPL chairman and banned BCCI administrator, Lalit Kumar Modi wrote: "Recieved the news on Sachin's retirement with mixed feelings. A truly remarkable man -none like him exists,he is not only revered, worshiped.

"But he is someone I and billions look upto. Feel sad he will not be lighting up the field In the style we are so accustomed to."

IPL CEO Sundar Raman said, "salutethelegend no words to express the emotion. Feel an emptiness. @sachin_rt thank you for sharing your journey with millions of fans."

Comments
Topics mentioned in this article
Cricket Danny Gabbidon Michael Clarke Eoin Morgan Michael Vaughan Sachin Ramesh Tendulkar Kevin Pietersen Carlton Cole England Cricket Team
Get the latest updates on IPL 2020, check out the IPL Schedule for 2020 and Indian Premier League (IPL) Cricket live score . Like us on Facebook or follow us on Twitter for more sports updates. You can also download the NDTV Cricket app for Android or iOS.