Unmukt Chand struck 17 fours and a six during his stay at the crease while Ian Dev Singh, in his 180-ball knock, hit 11 fours and two sixes. 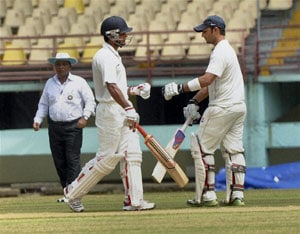 Young opener Unmukt Chand led the way with a patient century as North Zone posted a formidable 329 for two in their Duleep Trophy semifinal against East Zone here on Friday.

While the 20-year-old Chand made 116 off 230 balls, Ian Dev Singh was unfortunate to have missed his century by five runs due to a hamstring injury.

After only 17 overs were bowled on the opening day yesterday due to rain, North Zone batsmen batted with purpose today to reach a strong position after batting 112 overs at the Nehru Stadium.

At stumps, Mandeep Singh and Rajat Paliwal were batting on 40 and 41, respectively.

Chand struck 17 fours and a six during his stay at the crease while Ian Dev, in his 180-ball knock, hit 11 fours and two sixes.

Resuming at 33 for no loss, North lost their first wicket when Ashok Dinda dismissed Jiwanjot Singh for 24 with the team score reading 50.

Then followed a big 198-run stand for the second wicket between Unmukt and 24-year-old Ian Dev, leaving the East Zone bowlers looking for answers.

The bowlers couldn't effect a breakthrough till Shahbaz Nadeem brought an end to Chand's tenure with his team well placed at 248 for two.

Mandeep and Paliwal then added 81 runs for the third wicket as North finished the day without losing any more wicket.

Only Dinda and Nadeem could get their names on the wicket column.

Comments
Topics mentioned in this article
Ian Dev Singh Cricket Unmukt Chand
Get the latest updates on India vs Australia Series, check out the India vs Australia Schedule for 2020-21 and Ind vs Aus live score . Like us on Facebook or follow us on Twitter for more sports updates. You can also download the NDTV Cricket app for Android or iOS.