The 24-year-old pacer limped out of action during last week's drawn match with the second-string England Lions in Leicester. Has now been cleared. 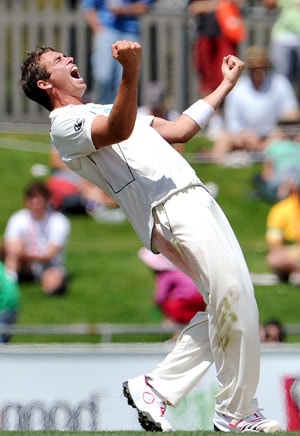 Tim Southee, the New Zealand seamer, has been passed fit to play in the first Test against England at Lord's on Thursday (May 16).

The 24-year-old pacer limped out of action during last week's drawn match with the second-string England Lions in Leicester, New Zealand's final match before the first of a two-Test series that culminates later this month at Headingley.

But having had a scan on the sore left toe that was hampering him and seen a specialist, Southee has now been given the all clear.

Had he been sidelined, the tourists would have had to lean heavily on left-arm quicks Trent Boult and Neil Wagner, who starred in the drawn 0-0 series across three Tests against England in New Zealand two months ago, and the fit-again Doug Bracewell.

However, with 24 Tests behind, Southee is a seasoned Test player and New Zealand coach Mike Hesson was glad to have him available for the series opener.

"Tim's fine. It was very much a precautionary response really from us," Hesson said. "We sent him down to London for further investigation, and basically the result was as we hoped. He's had some treatment to his left toe, and we're very comfortable he'll be right for the first Test."

Wagner might have played in any case, as New Zealand's leading wicket-taker in the three recent draws.

He too has recovered from a minor toe injury and Hesson said: "It will be very hard to leave him out. Neil is very much in consideration to play."

Early season conditions in England often favour seamers and Hesson said naming a four-man attack without left-arm spinner Bruce Martin. "Absolutely. That's an option," added Hesson. "Whoever is left out, it will be a tough decision."

On the batting front, New Zealand will look to the stylish Ross Taylor to play to his true potential. The former captain was rarely at his best during the series in New Zealand, where he returned to the side following a brief self-imposed exile caused by the bungled way in which he was replaced as captain by current skipper Brendon McCullum.

"You get a good delivery every now and then, and you miss out," said Hesson. "But Ross is a quality player, who averages over 40 in Test cricket. He's our best batsman. He knows the conditions well, and I expect him to have a big series."

Many members of the New Zealand team will be playing their first Test at Lord's, 'the home of cricket', this week and Hesson said the mood in the camp was upbeat.

"We've only got three who have played a Test match here. We've had a number of others who've played other forms of the game," he said. "There's certainly a huge level of excitement there - no doubt about that. "It will be a great experience, regardless of the result, but it will be reviewed a lot more fondly if we perform well. We're very much looking forward to having another crack at England, and hope we can put them under pressure again."