For the special occasion, Virat Kohli, who helped his wife onto the stage amid loud cheers, was wearing a black bandhgala with a shawl draped on one shoulder to complement his looks. 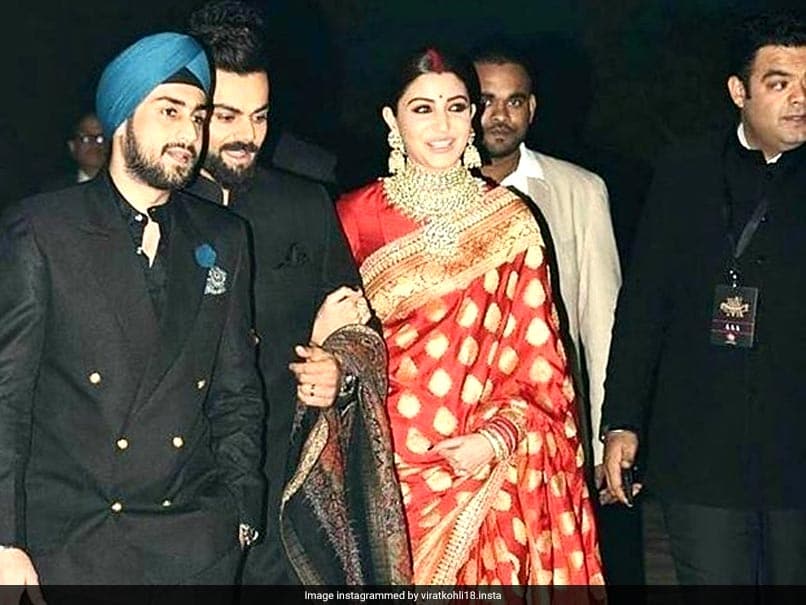 Prime Minister Narendra Modi and Finance Minister Arun Jaitley were the star attraction at Virat Kohli and wife Anushka Sharma's wedding reception, which was mainly attended by the family members and close relatives and friends of the couple amid high security. Police had blocked approach roads to the venue, especially for PM Modi and FM Jaitley's arrival. Apart from the two political heavyweights, there was another guest who stole the show at the Virushka reception in Delhi. The young 'celebrity' was none other than Shikhar Dhawan's son Zoravar. Dhawan's wife Aesha too was present at the function. Virat was seen dancing with Zoravar to a popular Punjabi number along with singer Gurdas Maan and Dhawan.

Anushka was all smiles as she looked every bit of the newly married bride donning a red sari. With a neatly-tied bun adorned by a 'gajra', the 'Rab Ne Bana Di Jodi' star completed her looks with heavy jewelry and vermilion.

Ace designer Sabyasachi Mukherjee, who has designed Virat and Anushka's costumes for all their wedding rituals, was also present at the reception.

Interestingly, a special stage was designed for the couple, both aged 29, with candles burning inside crystal fixtures.

Comments
Topics mentioned in this article
India Cricket Team Virat Kohli Shikhar Dhawan Cricket
Get the latest updates on IPL 2021, IPL Points Table , IPL Schedule 2021 , live score . Like us on Facebook or follow us on Twitter for more sports updates. You can also download the NDTV Cricket app for Android or iOS.