A century from Brendan Taylor helped Zimbabwe forge ahead from an overnight 92 for 4 to a solid position on the fourth day in Harare. 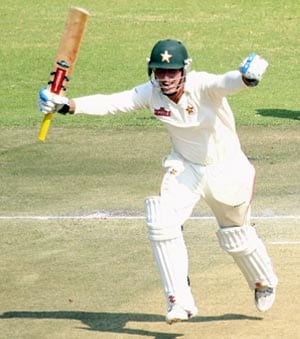 A century from Brendan Taylor helped Zimbabwe forge ahead from an overnight 92 for 4 to a solid position on the fourth day in Harare. During his hundred, his first in Tests and in his first match as captain, Taylor shared in a composed and profitable fifth-wicket partnership with Tatenda Taibu and upped the ante with Craig Ervine at the end. Zimbabwe declared at tea, earlier than expected, setting Bangladesh 375 in four sessions.

The visitor's openers made an enterprising start, racing to 50 in the ninth over to erode Zimbabwe's advantage. The home fans had a little less to worry about at stumps though, as Tamim Iqbal was bowled and a destructive, two-wicket burst from Kyle Jarvis reduced Bangladesh to 112 for 3. Jarvis removed Imrul Kayes and Shahriar Nafees after Chris Mpofu had taken out Tamim. Though the late strikes put Zimbabwe slightly ahead, what has been an evenly matched and contested game is in for a fascinating final day.

Bangladesh's bowlers lacked penetration again and presented almost no threat to the batsmen. Although Rubel Hossain started off generating good pace and the spinners worked to squeeze Zimbabwe with attacking field settings, they were unable to make any significant breakthroughs. They simply allowed too many scoring shots and ended up leaving themselves a massive task with the bat.

Hossain looked dangerous at the beginning of the day especially when he was able to bowl full and move the ball into the batsmen. But, after five overs without creating the early breakthrough Bangladesh needed, Shakib Al Hasan replaced him with Abdur Razzak. With spin from both ends, Tatenda Taibu was allowed to become the architect of Zimbabwe's strike rotation.

His confidence against spin and footwork that would make a ballerina proud helped Taibu boss the Bangladesh bowlers and score all around the wicket, sweeping and driving with equal distinction. He brought up a feisty half-century with a typical jig down the track and single to mid-off. Taylor, whose feet have never been quite as good as Taibu's, played a watchful knock from the other end, maintaining the cautious approach he had employed in the first innings.

With the left-arm spinners losing motivation, runs came easily for the Zimbabwe batsmen who threaded the ball through the gaps and ran well between the wickets, in addition to punishing anything wayward that came their way. Shakib bowled a particularly poor line later in his ten-over spell, veering too much on the leg side. After conceding five boundaries in three overs he took himself off and brought Mahmudullah on.

Together with Razzak, he shackled the batsmen who managed to score just nine runs in the ten overs before lunch. Taylor and Taibu could have succumbed to frustration in that period, but instead played a strong defensive game to take Zimbabwe to the break unharmed.

The second session started in a similarly cautious fashion, with Bangladesh ambling to their fielding positions and moving around the park slowly, trying to kill off any momentum in the match. They bowled just 12 overs in the first hour after lunch, compared to the 17.3 they managed in the first hour of the morning session.

Shafiul Islam was used for the first time in the day and bowled a line wide of off stump, while varying his lengths. After five, slow overs Taibu decided it was time to accelerate and in his first attempt at taking Shafiul on, with a smashing drive, was caught at deep extra cover. Taibu perished in the cause but Taylor and Craig Ervine were able to build the lead, as they upped the run rate, instead of merely biding time.

They took three overs to get their eye in and then Taylor drove Shafiul through midwicket to take the lead past 300. Ervine had the freedom to play his shots and executed a magnificent pull off Mahmudullah over midwicket and a sublime drive through the covers. The pair took on the fielders, putting pressure on them as they ran quickly and with assurance.

Taylor came into his own as the session drew to a close, with a few classic drives and reached his century with a sweep to backward square leg. Taylor is the second Zimbabwe captain to score his maiden century in his first match as captain, the other being David Houghton.

His sporting declaration during tea added to the intrigue of this Test match. Zimbabwe gave themselves 120 overs to bowl Bangladesh out while setting the opposition a required run-rate of just over three. It was an invite that the Bangladesh openers were not going to turn down and they set about their task with more intent than their bowlers had shown earlier.

Even though left-armer Brian Vitori was extracting the same movement as he has done through the match, Tamim Iqbal had his determined expression on and he was sticking to it. He battled against the away movement and his first boundary came from an edge that flew to third man but he soon found the middle of the bat. He slashed at anything wide and allowed Kayes to be a silent partner most of the time.

Tamim was in a hurry and kept the run-rate at almost five and with him at the crease, Zimbabwe didn't seem to have a plan. Their short balls were being picked early and their fuller deliveries going too wide. The opening bowlers were taken off and the more experienced hands of Elton Chigumbura and Mpofu were given the task of bowling to Tamim. Mpofu chose to go round the wicket and the plan worked immediately, with the angle causing a length delivery to uproot offstump.

Kayes and Nafees could not continue at the same rate, especially against the containing bowlers, who bowled tight lines. After they pulled the run-rate back to four, Jarvis was brought back and was rewarded by forcing Kayes to play at a ball that jagged into him, only to get the edge. Jarvis continued applying pressure, staying close to off stump, and bagged a late wicket when he chose to go round the wicket to Nafees and bowled him as he tried to drive. Mohammad Ashraful and Mushfiqur Rahim played out the rest of the day without being too defensive.