Gautam Gambhir made only six runs but Nitish Rana slammed a brilliant 44-ball 60 not out to help Delhi thrash Jharkhand by five wickets in the Syed Mushtaq Ali T20 Trophy. 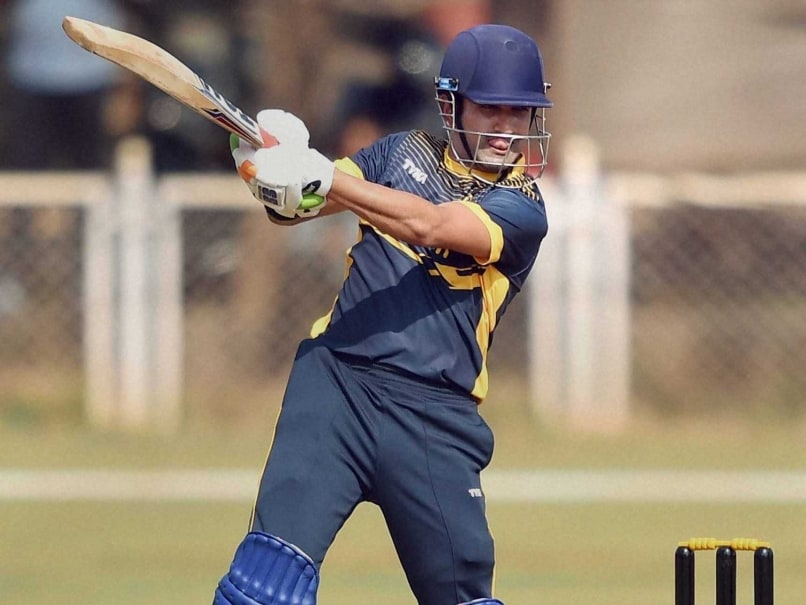 Gautam Gambhir of Delhi in action during a match against Jharkhand at the Syed Mushtaq Ali Trophy in Mumbai.© PTI

Delhi outplayed Jharkhand by five wickets for their first win in the Super League stage of the Syed Mushtaq Ali T20 Trophy, riding on Nitesh Rana's unbeaten half-century to pull things back after being precariously placed at one stage in Mumbai. (Read More in Cricket)

Put into bat, Jharkhand were restricted to 134 for seven in the allotted 20 overs. The side didn't start impressively with opener Kumar Deobrat being dismissed for 13 by Delhi medium pacer Parwinder Awana at the Bandra-Kurla Complex.

Sumit Kumar, who walked in at number 3, fell for just one run, thanks to a splendid catch by Pawan Negi.

Saurabh Tiwary, who has played three ODIs, also went back to the pavilion quickly, managing just nine runs before being trapped in front of the wicket by Akash Sudan.

Ishank Jaggi and opener Virat Singh then stitched a 62-run partnership for the fourth wicket. The stand was broken by spinner Manan Sharma when Virat was caught by Nitesh Rana. In the next delivery Kaushal Singh gave an easy catch to Unmukt Chand duck with the score reading 108 for five.

Meanwhile, Jaggi,who hit four fours, fell for 42 after being caught by Rana off Awana. Shasheem scored just five as he was caught by Sudan off Awana again. Varun Aaron and Rahul Shukla remained unbeaten on 2 and 11 respectively.

For Delhi, Awana was the most successful bowler, clinching three wickets. Manan Sharma took two, while Saini and Sudan took a wicket each.

For Delhi, it was a horrendous start to their innings with openers Gautam Gambhir and Unmukt Chand falling cheaply for six and three, respectively. Delhi were struggling at 14 for three after Subodh Batti, who came in at number 3, was clean bowled by Aaron, who took two wickets in a single over.

Dhruv Shourey along with Rana steadied the innings as they inched closer to victory. Shourey scored 30 before departing as he was caught by Rahul Shukla off Kaushal Singh, thus ending a 64-run stand.

A sloppy Jharkhand were still never in the fray as they dropped three catches.

Meanwhile, Pawan Negi joined Rana to finish things off in 18 overs. Rana remained unbeaten on 60 and Negi on 24, finishing the match in style with a six.

While Delhi will face Uttar Pradesh in a must-win encounter on Monday, Jharkhand have only pride to play for when they take on defending champions Gujarat.

Raiphi Gomez smashed an unbeaten 47 off 21 balls with three sixes and as many fours to guide Kerala to a shock four-wicket victory over two-time former champions Baroda in the Mushtaq Ali T20 tournament in Mumbai.

Gomez's whirlwind, unbroken partnership of 45 off just 17 balls for the seventh wicket with Prashanth Padmanabhan, who remained not out on 17 after hitting two successive sixes off Munaf Patel in the 19th over, enabled Kerala to chase down Baroda's total of 160 for 6, with two balls to spare, at the Wankhede Stadium.

Kerala's first win in two games in Super League Group A, after the loss to hosts Mumbai in the opener, has kept their hopes of topping the group alive while Baroda suffered their first defeat in two games after their victory over Vidarbha.

Kerala were struggling at 15 for 3 after a twin strike by rival skipper Irfan Pathan who packed off their leading scorers in the preliminary league, hard-hitting opener Sanju Samson and one-down Rohan Prem, within the first five overs.

With Munaf accounting for V A Jagadeesh in the second over, Kerala were in deep trouble before they recovered to 106 for 4 by the 15th over, thanks to Nihlil Surendran (36 in 32 balls) and captain Sachin Baby's quickfire 44 in 35 balls, with two sixes and four fours.

But Baroda seemed to have things well under control with Kerala needing to score 55 off 30 balls when Gomez upped the tempo by hitting the wayward Rishi Arothe for a six and a four in the 18th over to bring down the asking rate.

When 27 were needed in the last 12 balls, left-handed Prashanth dispatched Munaf over the leg-side field for two sixes and then Gomez once again lashed out at Arothe to score two twos, a four and then finished off the game with a six.

Earlier, Baroda built their innings on opener Kedar Devdhar's slow 31, Deepak Hooda's 32 in 16 balls and Irfan 35 not out in 18 balls to put up a challenging score. Prashanth impressed with a haul of 2 for 15.

Shreyas Iyer's 51-ball 86 run blitzkrieg helped Mumbai sail past a tall Vidarbha total to notch up a five-wicket win in the Super League phase of the Syed Mushtaq Ali T20 Group A match.

Chasing Vidarbha's score of 181 for four, built mainly around opener Jignesh Sharma's punishing knock of 56 off just 30 balls, Mumbai cantered home in 18.5 overs to register their second straight victory in as many days in the tournament, at the Wankhede Stadium.

Iyer and skipper Aditya Tare (41 in 24 balls) steadied the Mumbai innings after the early loss of left-handed opener Akhil Herwadkar (4) through a brisk second-wicket partnership of 71 runs in 7.2 overs.

After Tare fell, Iyer combined forces with Sidhesh Lad to take the score to 162.

Though the hosts lost these two batsmen as well as Abhishek Nayar in quick succession to be on 164 for five, Shashank Singh (14 not out) and the experienced Suryakumar Yadav (4 not out) guided the side past the finish line with seven balls to spare.

Earlier put into bat, Sharma hit two sixes and four fours to revive Vidarbha, who had lost to Baroda yesterday and are out of reckoning for a place in the final on January 20, in the company of Ganesh Satish (25) after Dhawal Kulkarni had fired out consistent opener Faiz Fazal (0) with his second ball.

The second wicket partners put on a breezy stand of 68 runs before Satish departed.

Medium-pacer Sagar Trivedi got rid of both Sharma and Ravi Janghid before Apoorva Wankhede (36) and Urvesh Patel (31) helped Vidarbha past the 180 mark with an unconquered fifth wicket stand worth 79 runs.

But the total proved inadequate against Iyer's assault.

Comments
Topics mentioned in this article
DEL JHA KER BAR Gautam Gambhir Cricket
Get the latest updates on India vs England Series, India vs England , live score and IPL 2021 Auction . Like us on Facebook or follow us on Twitter for more sports updates. You can also download the NDTV Cricket app for Android or iOS.