Swann has faith in England's strength despite Pietersen's absence

England off-spinner Graeme Swann has insisted the side will not be weaker for the absence of Kevin Pietersen for this week's third Test against South Africa at Lord's. 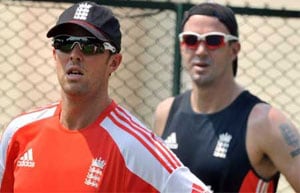 England off-spinner Graeme Swann has insisted the side will not be weaker for the absence of Kevin Pietersen for this week's third Test against South Africa at Lord's.

Even though star batsman Pietersen scored a superb 149 in the second Test at Headingley, he was dropped after failing to reveal the contents of text messages allegedly sent to South African players during that match.

The England and Wales Cricket Board (ECB) told Pietersen his selection was contingent upon him either confirming publicly no derogatory texts about his team-mates had been sent to South African players or, if they had, to apologise for them.

Pietersen has yet to respond to the ECB's request, amidst allegations the texts contained disparaging remarks about England captain Andrew Strauss.

But Swann was adamant the furore would have no impact upon a Test starting Thursday that England must win to retain their world number one ranking in the five-day game.

"We need to pull in the same direction, not 10 of us doing it and one of us not," Swann wrote in his column for The Sun on Tuesday.

"Just because you lose one player, it doesn't necessarily make you a weaker team.

"In fact, since Kevin retired from limited-overs cricket, we are unbeaten in all matches in the shorter formats."

Pietersen was named man-of-the-match at Headingley but afterwards gave an extraordinary press conference in which he hinted the Lord's Test could be his last and suggested dressing room unrest.

"I watched a video of Kevin's press conference last Monday at Headingley, when he spoke about supposed problems in the dressing room," Swann added.

"I was certainly shocked by those claims."

Former England opener Geoffrey Boycott, writing in the Daily Telegraph, said: "Texting comments to the opposition about the captain was unforgivable.

"Telling them how to bowl and get him out is simply not acceptable and deserves a public apology.

"No young player can equal his experience and ability. England already have a young batsman, James Taylor, in only his second Test and now have a young Jonny Bairstow in only his fourth match.

"But having said that, winning is not the only thing. The issues around Pietersen are more important than England beating South Africa."

South Africa coach Gary Kirsten sidestepped the row by saying: "We will never under-estimate any team, we will never go into any Test match complacent and arrive thinking the job is done."

Pietersen had been known to be upset by a fake Twitter account - KP Genius - followed by several of his England team-mates but the man behind it, cricket fan Richard Bailey, said he'd closed it down.

"Yes the parody was me," said Bailey. "It was for humour purposes only and as soon as I realised it was upsetting people I took it down.

"No professional cricketers were involved in it...I would also like to apologise to anyone I know involved with England Cricket who I may have put in an awkward or embarrassing position."