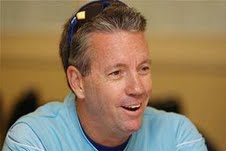 Law's role in the newly-created position will be to assist head coach Troy Cooley to provide tactical and technical support to Australian cricketers in state and national programs, Cricket Australia said on Tuesday.

Centre of Excellence manager Belinda Clark said Law had enjoyed success as a coach with Sri Lanka, leading them to the World Cup final in 2011, and with Bangladesh, which reached the Asia Cup final last month.

Clark said "his knowledge of the subcontinent and England, and his experience with Sri Lanka and Bangladesh, will bring a global perspective to the COE."

Comments
Topics mentioned in this article
Cricket TJ Cooley Stuart Grant Law Gregory Stephen Chappell BJ Clark
Get the latest updates on Fifa Worldcup 2022 and check out  Fifa World Cup Schedule, Stats and Live Cricket Score. Like us on Facebook or follow us on Twitter for more sports updates. You can also download the NDTV Cricket app for Android or iOS.