SL vs SA: Quinton de Kock and Reeza Hendricks hit unbeaten half-centuries as South Africa chased 121 to beat Sri Lanka by 10 wickets in the third T20I and win the series 3-0. 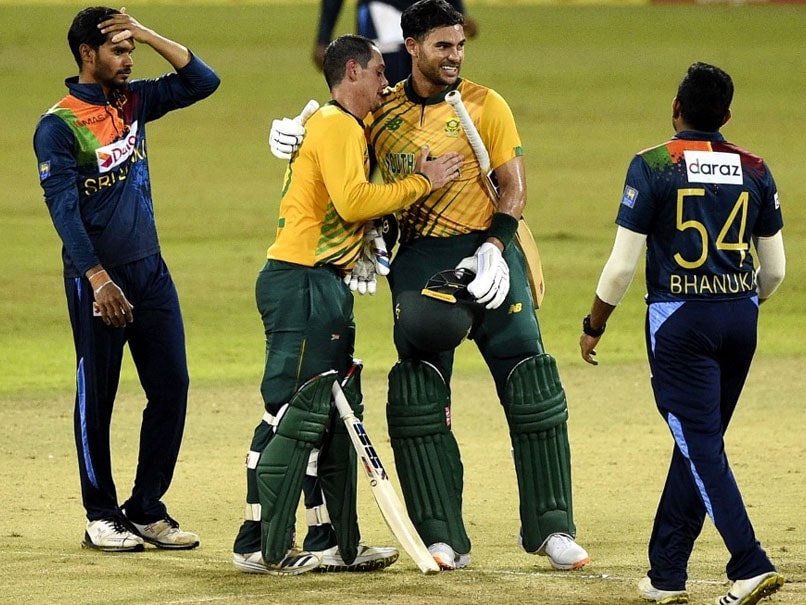 De Kock and Hendricks then put on South Africa's highest T20 partnership of 121 for any wicket against Sri Lanka in another show of dominance after their previous nine-wicket win.

De Kock, a left-hand wicketkeeper-batsman who hit a match-winning 58 in the second T20I, raised his fifty in 40 balls and took the attack to the opposition bowlers.

Hendricks recorded his seventh T20I half-century and hit five fours and one six in his 42-ball knock.

South Africa's bowlers set up the win after Rabada rattled the top order with his pace. He sent back Avishka Fernando for 12 and bowled Bhanuka Rajapaksa for five.

Fortuin got two key wickets including Dhananjaya de Silva, stumped for one, and Wanindu Hasaranga, out for four, to return figures of 2-21 with his left-arm spin.

Opener Kusal Perera top-scored with 39 before falling to skipper and left-arm spinner Keshav Maharaj who trapped the wicketkeeper-batsman lbw.

Sri Lanka slipped to 86-7 before number nine Chamika Karunaratne hit an unbeaten 24 off 19 balls to give the team total some respect as he finished the innings with a six.

It was a disappointing result for Dasun Shanaka's Sri Lanka who had won the three-match ODI series 2-1 last week.

Kusal Perera Bjorn Fortuin Sri Lanka vs South Africa, 3rd T20I Cricket
Get the latest updates on Fifa Worldcup 2022 and check out  Fifa World Cup Schedule, Stats and Live Cricket Score. Like us on Facebook or follow us on Twitter for more sports updates. You can also download the NDTV Cricket app for Android or iOS.