The hosts now need to score just 73 more runs to take first innings lead and barring a collapse they would book their berth in the title clash. 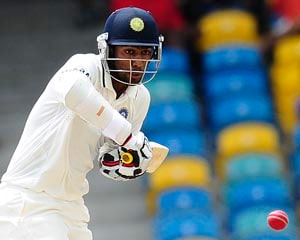 South Zone took a commanding position in the Duleep Trophy semifinal as they skittled out Central Zone for a mere 209 before reaching 137 for two in reply on the second day of the match, here on Friday.

Resuming at the overnight 123 for 5, Central Zone kept losing wickets at regular intervals with skipper Piyush Chawla being the team's top-scorer with a fine knock of 56.

In reply, South Zone were cruising along with captain Abhinav Mukund (61, in pic) and Baba Aparajith (35) at the crease when stumps were drawn for the day.

The hosts now need to score just 73 more runs to take first innings lead and barring a collapse they would book their berth in the title clash.

In the morning session, overnight batsman Shalabh Srivastava (22) did not last too long and was trapped LBW by Malolan Rangarajan.

Chawla tried to hold fort for some time but after a 42-run seventh-wicket partnership with Jalaj Saxena, he became spinner Pragyan Ojha's second wicket in an overall tally of 3/49. Chawla's stay at the crease yielded four fours and three sixes.

The batsmen that followed him could not make much of as Central Zone folded for 209. Besides Ojha, Abhimanyu Mithun also grabbed a three-wicket haul, conceding merely 29 runs in his 14 overs.

In response, South made a good start with Mukund and Akshath Reddy (16) putting on 44 runs for the opening wicket. Chawla broke the stand before Umesh Yadav accounted for Lokesh Rahul (11).

However, Mukund found a steady partner in Aparajith, who was patience personified in his 100-ball stay at the crease today.

Mukund, on the other hand, has so far struck five fours in his 195-ball knock.

Comments
Topics mentioned in this article
Piyush Chawla Abhinav Mukund Cricket
Get the latest updates on ICC T20 Worldcup 2022 and CWG 2022 check out the Schedule, Live Score and Medals Tally. Like us on Facebook or follow us on Twitter for more sports updates. You can also download the NDTV Cricket app for Android or iOS.