Sri Lanka heeded new captain Dimuth Karunaratne's call to "compete in every session" on the first day of the first Test against South Africa. 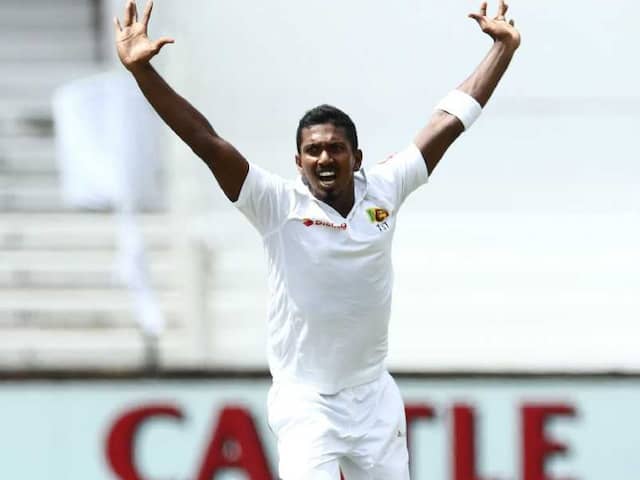 Vishwa Fernando took four wickets as underdogs Sri Lanka heeded new captain Dimuth Karunaratne's call to "compete in every session" on the first day of the first Test against South Africa at Kingsmead on Wednesday. South Africa, overwhelming favourites against a team seemingly in disarray, were bowled out for 235. Sri Lanka were 49 for one at the close. Left-arm opening bowler Fernando dismissed both South African opening batsmen cheaply as the hosts found themselves floundering at 17 for three after being sent in on a pitch which offered bounce and swing on a partially overcast morning.

Fernando, 27, playing in his fourth Test, went on to claim career-best figures of four for 62. Kasun Rajitha took three for 68.

Wicketkeeper Quinton de Kock, batting at number six because South Africa picked five specialist bowlers, gave the South African innings some respectability by hitting 80 off 94 balls before he was last man out.

Sri Lanka lost Lahiru Thirimanne, caught behind off Dale Steyn for nought, but Karunaratne batted confidently to be 28 not out at the close, while new cap Oshada Fernando went on the attack when South African captain Faf du Plessis turned to spin bowling as the light faded to finish on 17 not out.

Sri Lanka came into the match having lost six of their most recent seven Tests and with several changes in playing personnel, including the dropping of regular captain Dinesh Chandimal, and selectors.

Vishwa Fernando arguably owed his place in the team to the fact that three of Sri Lanka's leading fast bowlers were missing because of injury. But he produced a superb opening spell, having Dean Elgar caught behind and bowling Aiden Markram with a ball which swung back into the stumps.

Fernando dismissed Elgar with his fourth delivery before a run had been scored and should have had the wicket of Hashim Amla two balls later. He appealed passionately for a leg before wicket decision and the Sri Lankans were ruled to have taken too long before asking for a review of umpire Aleem Dar's decision.

Replays showed the ball had pitched in line and would have hit the stumps - and that Sri Lanka's request for a review had come three seconds before the maximum 15 seconds allowed.

The lapse was inexpensive as Amla made only three before being caught low down at second slip by Kusal Mendis off Suranga Lakmal, who had an outstanding first spell of one for six in seven overs.

Temba Bavuma and Du Plessis rode out the early storm and gradually started to change the momentum in a 72-run partnership which was ended in the last over before lunch when Du Plessis was caught down the legside by wicketkeeper Niroshan Dickwella off Rajitha for 35.

Bavuma looked the most assured of the South African batsmen but was run out for 47 off 68 balls, with seven fours, when a straight drive by De Kock ricocheted off bowler Fernando's boot into the stumps at the bowler's end. After numerous replays television umpire Ian Gould decided Bavuma had narrowly failed to get his bat behind the crease.