South Africa surged to the top spot in the tri-series tournament in the West Indies after defeating Australia by 47 runs in Guyana, thus earning a bonus point. 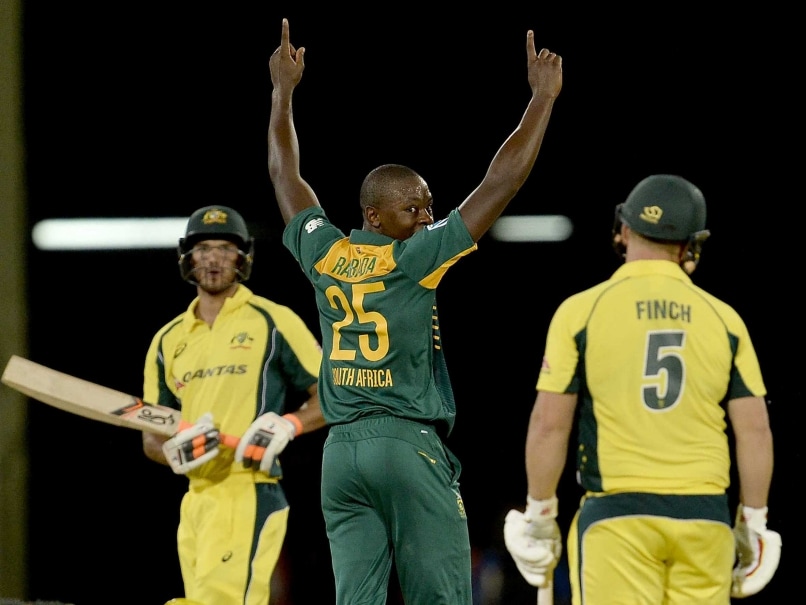 Kagiso Rabada picked up 3/13 as South Africa defeated Australia by 47 runs to earn a bonus point and go on top of the table in the tri-series tournament.© AFP

South Africa roared back into contention in the Tri-Nation One-Day International series with a 47-run victory over Australia in the third match of the tournament at the Guyana National Stadium on Tuesday.

Defending a modest 189 for nine on another pitch that challenged the patience and technique of all batsmen, the Proteas bowlers were resisted only by opener Aaron Finch's defiant 72 before he was ninth out as the World Cup-holders folded for 142 off 34.2 overs.

By virtue of their margin of victory, South Africa also earned a bonus point and leapt from last to first on net run-rate over Australia, leaving hosts West Indies third. Competition resumes in St Kitts on Saturday with South Africa and Australia renewing their rivalry at Warner Park.

Farhaan Behardien's workmanlike innings of 62 held South Africa's innings together and earned him the "Man of the Match" award. However pacer Kagiso Rabada shared the plaudits with a useful unbeaten 15 as the tail contributed important runs and then led the way with the ball as he claimed three for 13 off seven probing overs.

Rabada disposed of Usman Khawaja in his opening spell and returned to account for wicketkeeper-batsman Matthew Wade and tailender Nathan Coulter-Nile in an excellent display of controlled fast bowling. His effort was supported by Wayne Parnell, who shared the new ball and got rid of the dangerous David Warner in his very first over.

Spinners Imran Tahir and Aaron Phangiso then tightened the stranglehold with two wickets apiece, while Tabraiz Shamsi, the left-arm leggie, marked his debut with the wicket of Glenn Maxwell in his first over to ensure there was no escape for the Aussies.

"We started well with the two seamers although this wasn't the kind of surface where they were having the time of their lives," captain A.B. de Villiers said. "(Tabraiz) Shamsi was a handful for their batters. I didn't see a lot of them picking him."

Earlier, Australia's fast bowling pair of Coulter-Nile and Josh Hazlewood proved most effective with two wickets each in restricting the Proteas after de Villiers surprisingly chose to bat first on winning the toss.

"We didn't adapt well enough with the bat today," was Smith's assessment of his team's reply. "We've got a couple of tough games ahead of us now and we have to improve on this effort."

Coulter-Nile, who replaced Mitchell Starc from the opening victory over West Indies two days earlier, made the most of the opportunity with a spell of two for 38 off 10 overs.

He claimed the vital wickets of de Villiers and J.P. Duminy in consecutive overs to reduce the South Africans to 104 for five midway through the innings, effectively killing off any realistic chance they had of posting a formidable total.

Hazlewood was even more economical in conceding 20 runs off 10 metronomic overs. He earned an LBW verdict against Quinton de Kock to break the opening partnership with Hashim Amla and returned to get rid of Parnell.

South Africa entertained hopes of a challenging total when de Villiers and Amla were at the crease. The two most experienced batsmen in the side put on 40 for the third wicket before Amla was run out for the third time in ODI's against Australia.

Wickets continued to fall regularly thereafter and it was left to the lower-order players Phangiso and Rabada to assist Behardien in lifting the South Africans closer to the 200-run mark.

Comments
Topics mentioned in this article
Australia Cricket Team South Africa Cricket Team Aaron Finch Kagiso Rabada Farhaan Behardien Providence Stadium, Guyana Cricket
Get the latest updates on IPL 2021, check out the IPL 2021 Schedule and Indian Premier League Live Score . Like us on Facebook or follow us on Twitter for more sports updates. You can also download the NDTV Cricket app for Android or iOS.