South Africa suffered a major setback as J.P. Duminy is out of action for upto 6 months after a freakish accident while warming down. 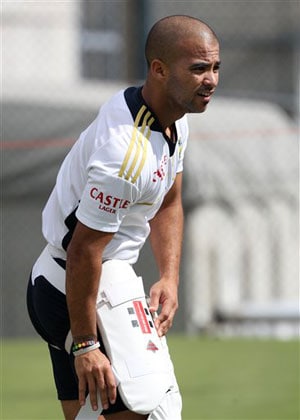 A training accident has led to seriously bad news for South African middle-order batsman JP Duminy. When Duminy injured himself in a warm-down freak accident after South Africa dominated the opening day of the first test against Australia on Friday, little would he have known of the consequences.

The scans have revealed a ruptured achilles tendon which will require an operation and will keep him out of action for upto 6 months.

Team manager Mohammed Moosajee said: "At first assessment JP said he heard a loud clicking sound and it felt like he had been hit by an object. The diagnosis of an Achilles' tendon rupture was confirmed by the MRI scan this evening and he will undergo surgery to re-attach the tendon Saturday morning."

"Injuries of this nature are caused by a sudden contraction against the direction of movement by the calf muscle as was the case during his sprint."

"We will only be able to gauge further down the line on an expected recovery date, but injuries of this nature have been known to take up to at least six months before the player can resume playing cricket," Moosajee said.

Duminy will not feature in the rest of the match, with 12th man Francois du Plessis assuming the fielding duties. He will return back to South Africa as soon as possible with a replacement to be named in due course.

The 28-year-old allrounder was kicking a rugby ball with teammates at the Gabba on Friday, after the South Africans had reached 255-2 at stumps on day one of the first test.

Team medical staff treated him on the ground before he was helped from the field. A team spokeswoman said he was taken to a nearby hospital for tests.

The injury is a major setback for South Africa as Duminy will be unable to bowl his off breaks. South Africa opted for five pace bowlers, leaving legspinner Imran Tahir out of the starting XI for the first test to give seamer Rory Kleinveldt his debut.

Opening batsman Alviro Petersen told a news conference after stumps that he was unsure of Duminy's condition, but was confident the bowling attack would be still be up to the challenge against Australia.

"We're pretty comfortable with our bowling attack. Rory coming in for Imran. We're in a great position to leave a guy like Imran out and ... to have a guy like Rory as backup," he said. "JP obviously was going to bowl some off spin for us, so we'll hear tonight and we'll make decisions based on his fitness."

Duminy, a key contributor in the lower middle order with the bat, has taken 12 wickets in 16 tests for South Africa and was the only genuine spinning option in the lineup in Tahir's absence. Now, even his batting absence will be a major concern for South Africa.

(With AP and IANS Inputs)

Comments
Topics mentioned in this article
Cricket JP Duminy Australia Cricket Team South Africa Cricket Team
Get the latest updates on IPL 2021, IPL Points Table , IPL Schedule 2021 , live score . Like us on Facebook or follow us on Twitter for more sports updates. You can also download the NDTV Cricket app for Android or iOS.