South Africa were shot out for their lowest-ever Test score of 79 in their first innings against India in Nagpur with Ravichandran Ashwin and Ravindra Jadeja capturing five and four wickets, respectively. 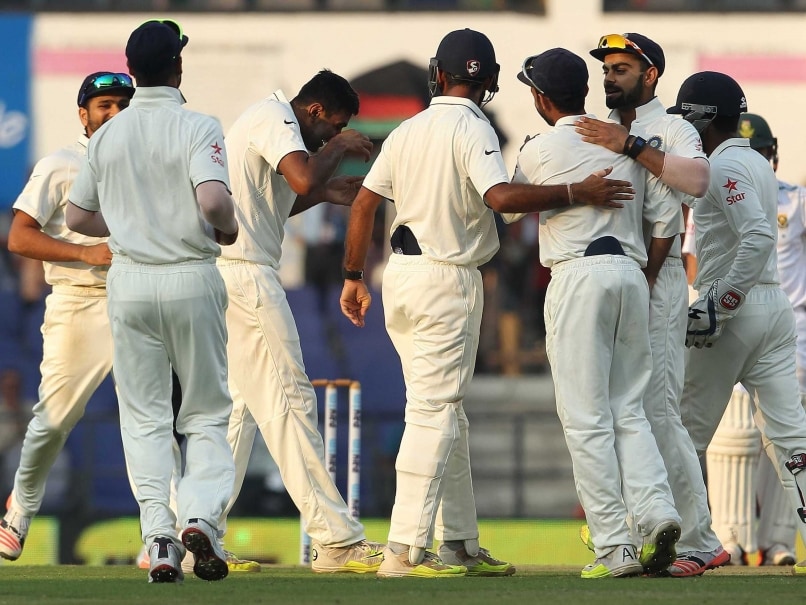 South Africa are not going to hit out at the VCA Stadium pitch here on which 32 wickets have fallen in the first two days of the third and penultimate Test against India, said their coach Russell Domingo after day two on Thursday. (ScorecardÂ |Highlights)

"You have to give India credit. They have prepared wickets that suit their style of play, and their spinners have been really good. They have bowled outstandingly well, and we won't criticise the pitch right now," said Domingo after twenty wickets tumbled on day two. (Sunil Gavaskar Hits Back at Indian Pitch Critics)

The visitors were also shot out for their lowest-ever Test score of 79 against India with the Indian spinners Ravichandran Ashwin and Ravindra Jadeja capturing five and four wickets, respectively, leaving leggie Amit Mishra to bag the remaining one.

He also did not rule out a series-levelling win, however improbable it may look, on the third day on Friday.

"Some strange things have happened in this game before. We are obviously a long way behind this game at the moment, we are not discounting ourselves just yet," said Domingo about the need for the visitors to get 278 more runs for an improbable win.

He said the main difference between his team's spinners and their Indian counterparts was in the degree of consistency shown to snare the rival batsmen.

While saying Imran Tahir, who took 5 for 38, and Morne Morkel were the stand-out performers for his team, Domingo also defended captain Hashim Amla's decision to introduce the leg spinner pretty late into the attack.

"Imran Tahir bowled really well today, and Morne Morkel has been outstanding, those are the two standout performers today. I think the captain felt that Simon was bowling really well to the left-handers, and tried to get a left-hander upfront. Also with JP (Duminy), because the ball was turning away, he could maybe do some damage, so that was maybe the reason.

"Immy has bowled well this series, and again today, but we do know that he has the tendency, at times, to leak runs, particularly when there are two batters who are set, and the captain probably felt at that stage he would go with the bowler who could give him a bit more control."

He also defended the move to send Tahir as night watchman for the second time in the match without the move paying dividends.

"He was a night-watchman, but he looked like a pinch-hitter," he said with a laugh.

"We felt that with Dale Steyn not being here, Immy has done well with the bat in the past and has the ability to hang around. Simon Harmer we feel, is too valuable with the bat, because we feel he can still get runs tomorrow. If someone is going to be sacrificed, Immy is not a bad option. He can eat up some balls. Unfortunately, it didn't work out today. If he had batted out there for two more overs, it would have been a great decision."

He also said the conditions have been very challenging for both teams' batsmen in the series so far.

"We know we haven't batted to our ability, but it's damn tough to bat out there. It shows in one Indian player scoring over 50 in this series, and that is Murali Vijay. AB (de Villiers) has scored two half-centuries, and that's it.

Comments
Topics mentioned in this article
South Africa Cricket Team India Cricket Team Ravichandran Ashwin Ravindra Jadeja Cricket
Get the latest updates on IND vs NZ 2021, check out the Schedule and Live Score . Like us on Facebook or follow us on Twitter for more sports updates. You can also download the NDTV Cricket app for Android or iOS.