Bangladesh lost seven wickets for 41 runs in less than an hour and a half as they were bowled out for 90 after being set 424 to win. 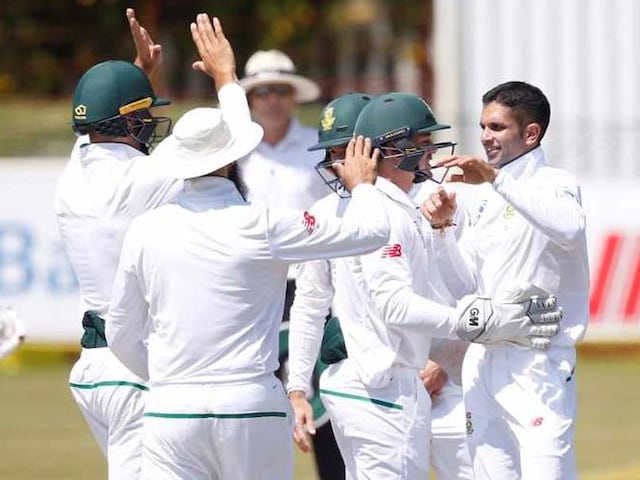 The pace of Kagiso Rabada and the spin of Keshav Maharaj sent Bangladesh crashing to a 333-run defeat on the fifth day of the first Test against South Africa at Senwes Park on Monday. Bangladesh lost seven wickets for 41 runs in less than an hour and a half as they were bowled out for 90 after being set 424 to win. South Africa's victory was overshadowed by an injury to fast bowler Morne Morkel, who is expected to be out for six weeks. Rabada started the destruction by taking the first three wickets of the morning. He finished with three for 33, while left-arm spinner Maharaj took four for 25.

Resuming on 49 for three, Bangladesh lost their captain, Mushfiqur Rahim, to the 12th ball of the morning when he pushed at a lifting delivery from Rabada and was well caught above his head by Hashim Amla at first slip for 16.

Mahmudullah was bowled off an inside edge when he played a tentative defensive shot against the fast bowler and Liton Das offered no shot and was leg before wicket to a ball which slanted in to him.

Sabbir Rahman and Taskin Ahmed were both leg before to Maharaj before Shafiul Islam was run out when he and Mehedy Hasan attempted a third run against the strong fielding arm of Rabada after a relay throw from twelfthman Wayne Parnell, who chased a ball to long-off.

Hasan and last batsman Mustafizur Rahman shared the best partnership of the morning, putting on 15 before Mustafizur pushed back a return catch to Maharaj.

Bangladesh's rapid demise meant that South Africa were hardly hampered by the absence of Morkel, who suffered a side strain after taking the first two wickets on Sunday.

Team manager Mohammed Moosajee said Morkel required around six weeks rest, ruling him out of the second Test in Bloemfontein, starting on Friday.

South Africa dominated the match after Rahm's surprising decision to send them in to bat on an easy-paced pitch, with Dean Elgar (199), new cap Aiden Markram (97) and Hashim Amla (137) enabling them to score 496 for three declared in the first innings.

Comments
Topics mentioned in this article
South Africa Cricket Team Kagiso Rabada Keshav Maharaj Morne Morkel Bangladesh Cricket Team Cricket
Get the latest Cricket news, check out the India cricket schedule, Cricket live score . Like us on Facebook or follow us on Twitter for more sports updates. You can also download the NDTV Cricket app for Android or iOS.
Advertisement