Ex-Aussie captain Waugh reignites a controversy that highlighted the intense rivalry between India and Australia in the historic 2001 series. 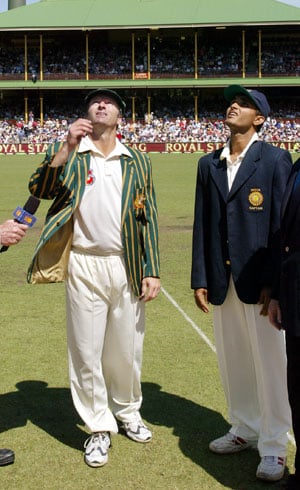 Former captain Sourav Ganguly may have shown a "lack of respect" by turning up late for toss when India locked horns with Australia during the historic 2001 Test series, feels Steve Waugh, who was a leading a bunch of extraordinarily talented Aussies in that rubber. (Also read: Sachin, Lara on equal terms, says Waugh)

"The fact that he turned up late every game -- it was his choice. I just thought it showed a lack of respect for the game. It didn't really affect me. The match referee actually told him that he had to turn up on time," Waugh said when asked about the controversial episode.

Ganguly though has previously denied saying it happened just once and not as Waugh says every game. "There is a tradition that both team captains have to sport the team blazer while going for the toss. On that particular day, I did not get my blazer and it took time to get hold of it... That was the reason for the delay," Ganguly had said.

Waugh, meanwhile, is hopeful of Australia scripting a turnaround in the remaining three Tests against England in the ongoing Ashes series, which the hosts lead 2-0.

"Australia have begun well the third Test at Old Trafford. Hope we can make a comeback in the remaining three Tests," said Waugh.

Australia ended the first day's play of the third Test at a commanding 303 for three yesterday at Old Trafford.

"The current Australian side is inexperienced, while England are experienced lot. We nearly won the first Test at Trent Bridge. So we need to just hang in there and have faith in our abilities," Waugh insisted.

"The young Australian players are immensely talented. We have a lot of talent, especially in bowling department," he added. (Australia complains to ICC about Usman Khawaja decision)

Waugh also felt that the Australian selectors should give an extended run to the youngsters so that they can prove their mettle.

"Constant chopping and changing deters players' confidence. The good thing that the selectors can do is to stick a team which they believe in. The players can use the opportunity to prove their abilities," he said.

"You can't find such testing situations in Twenty20 cricket," he said.

The former Aussie great advised the youngsters to concentrate more on Test cricket than Twenty20.

"Try and play for your country in Test cricket first; all the other things will fall in place afterwards," he said.

"I was the first to discover backhand slower bowl. My advise to kids is that when you are practising in the nets, you should concentrate on adding variety to your bowling."