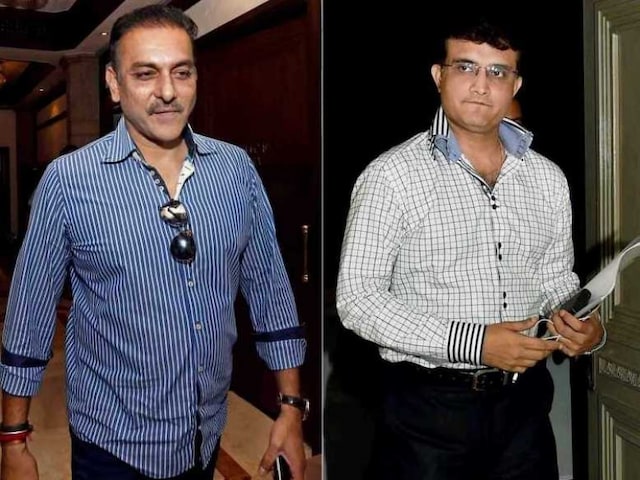 Sourav Ganguly has criticised Ravi Shastri and said he lived in a fool's paradise if he thought that he was responsible for not being India coach.© PTI

The controversy over Ravi Shastri's snub as India head coach has deepened with Sourav Ganguly, one of the members of the Board of Control for Cricket in India's Cricket Advisory Committee, expressing disappointment with his remarks.

Shastri, in an interview to India Today on Tuesday, had said that he was disappointed as he could not get the chance to carry forward all the good work which he had done in the last 18 months. The BCCI appointed Anil Kumble for the post of India coach for a one-year period.

Being pipped by Anil Kumble for chief coach's post, Shastri created a controversy when he said that, Ganguly, part of the three-member high-powered Cricket Advisory Committee (CAC) was not present during his interview which he found to be "disrespectful".

Â Not one to pull back punches, a furious Ganguly today gave it back to Shastri questioning the former India all-rounder's "seriousness" while giving an interview while "holidaying in Bangkok".

"I just feel his (Shastri) comments are very personal. If Ravi Shastri feels that Sourav Ganguly was responsible for him not being the India coach, he is living in a fool's world," Ganguly told NDTV.

One of India's most celebrated captains was even more terse while rebutting Shastri's suggestion that next time, he should be "present" when an interview is being conducted.

"It angers me that he gave a suggestion that I should be available for such meetings. I have been a part of BCCI meetings for some time and I have always been available. My advice to Ravi is that when the coach of India is selected and one of the most important jobs, he should be in front of the committee and not sit in Bangkok and give a presentation while being on a holiday," Ganguly said.

Taking a a dig at Shastri's casual approach, Ganguly said that the former Team Director could have been present in person "especially when one of India's greatest cricketers of all time spoke for two hours. I am hurt because of personal attacks.

"I read in a couple of newspapers and chose to ignore it. I am extremely saddened that he went on air to express his view. Specially someone who has been in every BCCI committee for the last 20 years. He has been in my position for selecting the coach 10 years back. He is aware of everything. I informed BCCI on June 19th and I have got official mails. I will circulate those mails once I get a clearance from BCCI," Ganguly said

Ganguly then went onto add,"I don't know whether he is serious or not serious but I hope he was if he wanted one of the most important jobs in the game. But if he is talking about respect then he should have been here as well."

"When you have a three-member committee and important people are involved in the decision making then it is not just about Sourav Ganguly, so these personal remarks have been very saddening."

On Shastri making comments on public domain against him, Ganguly said:"He should have shown a bit more maturity, especially for someone who has been in such committees for more than 10 years.

On Anil Kumble starting his stint as Indian coach, Ganguly said: "I wish him all the luck. As I said he is the best in the world. He is one of the champions of Indian cricket and he will take this team forward."

Ganguly did not give a direct answer to the queries about it his animosity with Shastri being an open secret in Indian cricket.

"From my side, I have never gone on to make any comments to the media."

Ganguly then also gave his account of the itinerary of that day.

"I had informed BCCI that there was a CAB Working Committee meeting that day. Being a president of CAB, I had to chair the meeting. Also the notification for a Working Committee is always given 14 days in advance whereas this meeting was fixed two days in advance. Ravi's meeting was scheduled at 4:15 pm and I guess Ravi has got that received as well. BCCI had sent him the time.

"Now while interviewing other candidates, it went past 5 pm and I came out of the meeting. Then Mr (Ajay) Shirke (BCCI secretary) called me and said that others (Sachin Tendulkar, VVS Laxman and co-ordinator Sanjay Jagdale) are requesting if they can continue (with the interviews). I said "fine, let's do that as it happens everywhere in the world. That's exactly what happened and I feel comments are very personal in nature."

- With Inputs From Saurabh Gupta in Kolkata-

Comments
Topics mentioned in this article
India Cricket Team Sourav Ganguly Ravi Shastri Cricket
Get the latest Cricket news, check out the India cricket schedule, Cricket live score . Like us on Facebook or follow us on Twitter for more sports updates. You can also download the NDTV Cricket app for Android or iOS.