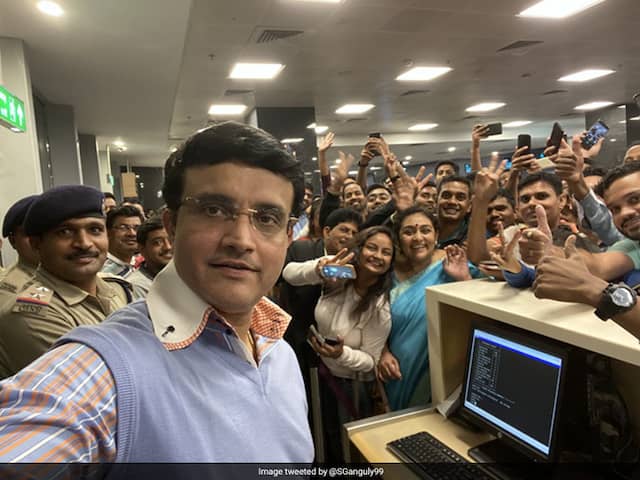 Sourav Ganguly was recently appointed as the president of the BCCI.© Twitter

Sourav Ganguly, the newly appointed president of the Board of Control for Cricket in India (BCCI), delighted the social media with a selfie with his fans at Bengaluru airport on Wednesday. "At the check in airport of Bangalore.. love of people makes u feel so grateful," Sourav Ganguly tweeted, along with a selfie with many of his fans and security personnel at the airport. Sourav Ganguly visited Bengaluru to meet his former India teammate and National Cricket Academy's chief Rahul Dravid at the Chinnaswamy stadium. Sourav Ganguly and Rahul Dravid held crucial discussions to give new shape to the NCA infrastructure in Bangalore.

At the check in airport of bangalore .. love of people makes u feel so grateful pic.twitter.com/FDP2fwzg6W

Fans poured in heartwarming messages for the 47-year-old former India captain on Twitter.

Dada, you have no idea how much crazy fan following you have in Bangalore! :)

Dada keep working for indian cricket and show everyone how to work and finish your responsibility when you hold a certain position. We all love you and are with you

Wow looks like a press conference at the Checkin counter :)

whole of India loves you dada... you fully deserve it

Ganguly, along with NCA officials, also visited the proposed land for building a new NCA facility.

The cricket governing body has got an additional 15 acres of land from the Karnataka government for setting up the Centre of Excellence near the international airport in Bengaluru.

The BCCI had completed the 25-acre deal with the state government in May. The total area of the facility is now 40 acres.

For over a couple of years now, the BCCI has been planning to find an alternate location to build the NCA with state-of-the-art facilities.

The land allocated for the NCA is a stone's throw away from the Kempegowda International Airport in Devanahalli. It should be adequate for three grounds, apart from indoor nets, administrative buildings, and the hostels. The land allotted is said to be on a 99-year lease.

Rahul Dravid Cricket BCCI
Get the latest Cricket news, check out the India cricket schedule, Cricket live score . Like us on Facebook or follow us on Twitter for more sports updates. You can also download the NDTV Cricket app for Android or iOS.