Smriti Mandhana, with 282 runs in the competition, is the highest run-getter in the Women's Cricket Super League. 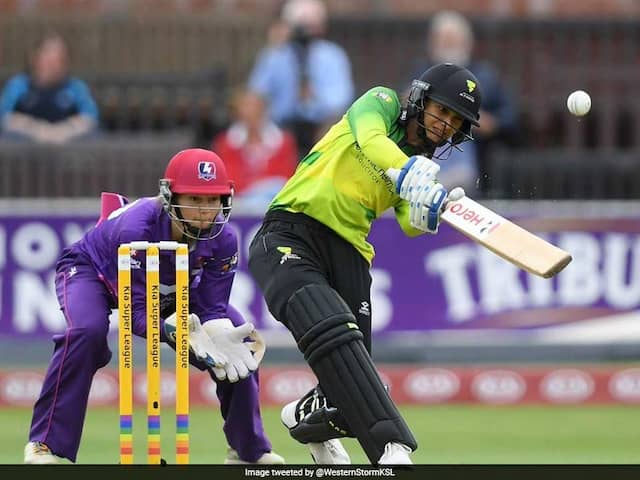 India opener Smriti Mandhana continued her dream run with yet another stunning performance in the Women's Cricket Super League, guiding her team Western Storm to a comfortable seven-wicket win against Lancashire Thunder with a 61-ball 102. Riding on Mandhana's hundred, her first in T20s, which included 12 fours and four sixes, Storm chased down a target of 154 and moved level on points with leaders Loughborough Lightning.

Earlier, Amy Satterthwaite had led the way for Thunder with a dominant 85 not out from 57 balls as they posted 153/7.

Despite losing Rachel Priest and England captain Heather Knight, Mandhana found an able partner in West Indies skipper Stafanie Taylor (33 not out) as the pair added 105 for the third wicket, rotating the strike sensibly and finding boundaries easy to come by against Thunder's spin-heavy attack.

Storm move on to face Yorkshire Diamonds at Scarborough on Sunday while Thunder are back at Old Trafford on Tuesday to face Surrey Stars.

Storm and Lightning now hold a six-point advantage over third-placed Thunder at the halfway point of the group stage.

Mandhana, who made her debut five years ago, has amassed 857 runs in 42 T20Is with the highest score of 76. Earlier in March this year, Mandhana smashed a half-century in 25 balls for India against England.

Comments
Topics mentioned in this article
Smriti Mandhana Cricket
Get the latest Cricket news, check out the India cricket schedule, Cricket live score . Like us on Facebook or follow us on Twitter for more sports updates. You can also download the NDTV Cricket app for Android or iOS.