Rahul Dravid and Glenn McGrath were honoured with the Sir Donald Bradman awards at the Sydney Cricket Ground. They were felicitated for their contribution to the game both on and off the field. 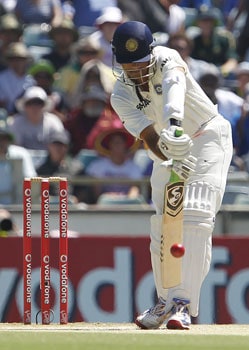 The guest list included a Who's Who of Australian cricket - Arthur Morris and Neil Harvey, the only two surviving Invincibles, Alan Davidson, Richie Benaud, Bob Simpson, Dennis Lillee, Jeff Thomson, Len Pascoe, Rick McCosker, Geoff Lawson and Stuart McGill. Also present was Stuart Clark, fresh off the flight from South Africa and basking in the glory of the Sydney Sixers' success in the Champions League Twenty20.

Tributes to Dravid and McGrath were paid by Benaud, Patron of the Bradman Foundation. Benaud said no player epitomised the spirit of cricket better than Dravid. "He represents everything that is decent about this great game," said Benaud, recalling commentating for the BBC in 1996 when Dravid and Sourav Ganguly made their Test debuts at Lord's.

Dravid could not be present at the function owing to illness in the family. His acceptance speech was delivered by John Howard, the former Prime Minister of Australia who said he was honoured to have in common with Dravid two things - a passion for cricket (Howard calls himself a "cricket tragic") and that both Howard and Dravid have delivered the Bradman Oration. Dravid was the first non-Australian to deliver the Bradman Oration last year, a mark of how highly respected he is Down Under. His acceptance speech was typical of the man, modest despite his brilliant achievements, always embodying his respect for the spirit of the game and fellow players.

He talked about his first hero, Sunil Gavaskar, a Bradman Honouree in 2010, and described the reaction in India when Sir Don said that Sachin Tendulkar's batting reminded the Don of himself. His speech summed him up - understated, elegant and dignified. Howard concluded by saying that no cricketer commanded more respect than Dravid.

Record books show that McGrath has taken more Test wickets than any other fast bowler but the Bradman Honour also reflects his exemplary character and determination. Since retiring from cricket, he has devoted much of his time to raising awareness and funding of breast cancer after the loss of Jane, his first wife, to the disease.

McGrath spoke of his early days in cricket, having the audience in stitches as he spoke of how his Under-16 captain always brought him on as the last bowler because he thought he couldn't bowl. He also spoke warmly about Dravid - the night would not have been complete without any reference to that famous day in March 2001 at the Eden Gardens when Dravid and VVS Laxman batted all day against an Australian attack boasting both McGrath and Shane Warne. "Nobody needs to tell me what a great player Rahul Dravid was - I was there!" said McGrath.

But the main focus of his speech was the work of the McGrath Foundation, which has now funded 78 specialist breast cancer nurses. His voice choked with emotion when he spoke of the great advances made since the Foundation was formed to the point now that the third day of every SCG Test is called "Jane McGrath Day" and everyone including players, officials and spectators wear pink. McGrath was named a member of the Order of Australia and also NSW Australian of the Year in 2008.

There followed a panel discussion on World Series Cricket featuring Benaud, Lillee, Thomson and McCosker. Benaud remarked that Cricket Australia was formerly known as the Australian Board of Control 'for good reason', in reference to the huge power imbalance administrators had over players in that era.

Lillee described the predicament of even the top players who either did not have jobs to supplement their relatively meagre match fees or relied on the goodwill of employers to give them time off to play cricket. Lillee summed up Packer's role in transforming the lot of the professional cricketer thus: "Every single professional cricketer should find Kerry Packer's grave and worship him."

WSC was not an instant success and the early matches were played in near empty stadiums. Benaud recalled the threshold moment at the SCG when he received a call from Packer during the first day/night match to say he had instructed the SCG ground authorities to open the gates and offer free admission - the result was a full house under lights, players in coloured clothing and the rest, as they say, is history. Cricket had been transformed from a game watched predominantly by middle-aged men to entertainment for the entire family and, importantly, packaged for television.

Fittingly, amongst the last to leave the venue after an evening of emotion and nostalgia were Harvey and Morris, the latter a sprightly 90. Invincibles, indeed.