Shoaib Akhtar Denies He is Marrying a 17 Year-Old

There were reports circulating in the Pakistan media that the 39 year-old Shoaib Akhtar is about to tie the knot. 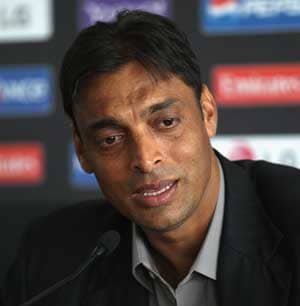 Shoaib Akhtar took to Twitter to deny reports of his marriage

The former Pakistan fast bowler has denied that he is getting married to a 17 year-old girl from Abbottabad.

Reacting to reports in Pakistan media, an angry Akhtar rubbished reports that he was marrying a teenager in the third week of June. In a series of tweets, Akhtar accused reporters of spreading rumours. Earlier on Saturday, a section of the Pakistan media reported Akhtar's upcoming marriage with 17 year-old Rubab.

"I would like to confirm that I'm not getting married to 17 year old girl,there is absolutely no truth in the story being reported..(Contd.)

Akhtar, who was recently seen on TV as an expert during the Indian Premier League 2014, has made headlines several times during his 15-year-old international career both with his cricketing exploits and off-field endeavours.

According to reports in Pakistan media, Akhtar is supposed to visit his hometown Rawalpindi on June 12 to finalise details of his wedding with Rubab, who has three elder brothers and a younger sister. Rubab appeared in intermediate examination in Abbottabad only last month.

Reports said Akhtar's family met Mushtaq Khan, a businessman from Haripur, while on Haj last year and discussions of a marriage started soon after. Rubab is not a cricket fan, but Akhtar is not only about cricket.

Akhtar's interests in life span from cricket to philanthropy. During the 2011 World Cup, Akhtar said in an interview that he wanted to build a hospital for the poor in Rawalpindi, just like Imran Khan did in Lahore for cancer patients. Imran's mother died from cancer.

Wishes are always welcome BUT NOT for some crap rumour...My journalist friends,I expect sensible reporting and not rumour spreading.Thanks!