Apart from stand-in skipper Shikhar Dhawan, Prithvi Shaw, Yuzvendra Chahal and Kuldeep Yadav, too can be seen in the image. 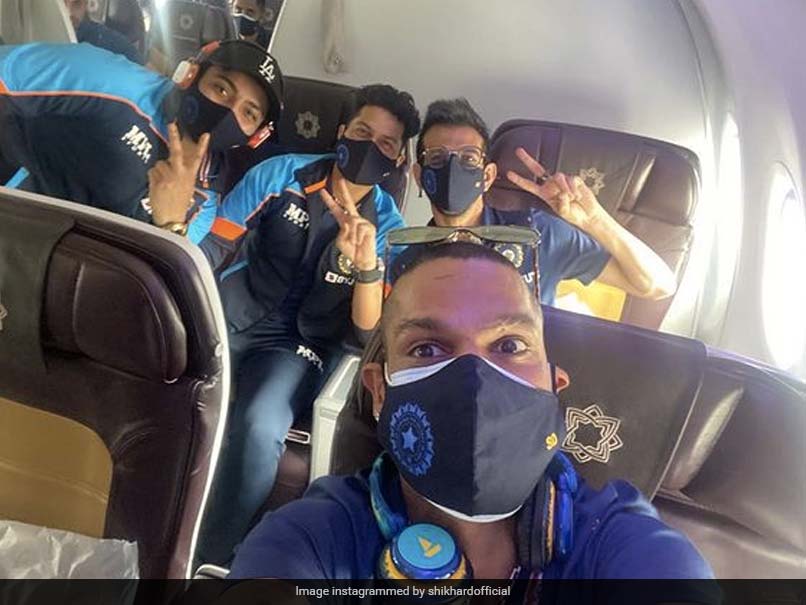 The Indian cricket team, under the leadership of Shikhar Dhawan, flew to Sri Lanka on Monday to play a three-match ODI series followed by three T20s. On Instagram, Dhawan shared a selfie with a few other players inside the flight before take-off. "Next stop, Sri Lanka!" he captioned the post, as the three players behind him -- Prithvi Shaw, Yuzvendra Chahal, and Kuldeep Yadav -- showed a "victory" sign. The Indian squad comprises a number of young players as most of the senior cricketers are in the UK, preparing for the five-match Test series against England.

Dhawan's Instagram post received more than 3.75 lakh likes within four hours of being shared. Some players commented on the post and several cricket fans, too, wished the Indian team luck.

"Have my eyes on you, skip. Find me in that pic," said right-handed top order batsman Surya Kumar Yadav. He is seen in the image sitting in the back, a few rows away.

Dhawan is leading the national side for the first time in his career in the absence of regular India skipper Virat Kohli and his deputy, Rohit Sharma. Seamer Bhuvneshwar Kumar will be Dhawan's deputy on this tour.

Both Dhawan and Bhuvneshwar were last seen in action during the first leg of the Indian Premier League (IPL).

The players had gathered in Mumbai and were in a two-week quarantine before flying to Sri Lanka today. They will play intra-squad games to prepare for the white-ball series.

For this tour, five uncapped cricketers -- Nitish Rana, Ruturaj Gaikwad, K Gowtham, Devdutt Padikkal, and Chetan Sakariya -- have been included in the national team after their impressive performances in the IPL and various domestic tournaments.