Dhawan toppled quite a few batting records en route to a 150-ball knock of 248. He overtook Virender Sehwag's 219 in an ODI against West Indies in 2011 to register the highest List A score by an Indian. 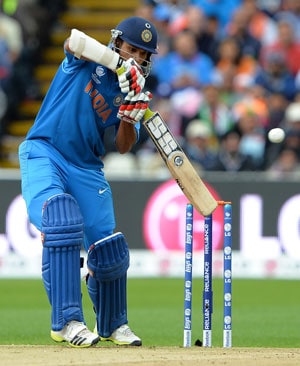 South Africa A skipper Justin Ontong described Shikhar Dhawan's hurricane 248 at TUKS Oval in Pretoria on Monday as watching a "highlights package." India A stormed into the final of the tri-nation competition after Dhawan's double ton set up a 39-run win against the home team. India will play Australia A in Wednesday's final.

Dhawan made the lives of the South African bowlers a misery as he raced to 100 in 86 balls and went on to dash to 200 in 132. The Protean bowling unit also entered record books as this was the first instance of five bowlers giving away more than 60 runs each in a List A match. (Also read: Dhawan says Sachin, Sehwag double centuries better than his)

"Every shot he hit found the gap or went over the fielders. It was like watching a highlights package. He hit so many good shots, it's hard to pick out one that stood out. There were a few sixes that went into the construction site. It was probably the best one-day innings I've seen," said Ontong.

"There was nothing the bowlers could do," Ontong said. "They were bowling the lines and lengths they wanted to be bowling and he just hit them off those lines and lengths." Dhawan, of course, enjoyed a slice of luck when Rusty Theron dropped him on 154 off Roelof van der Merwe's bowling.

Comments
Topics mentioned in this article
Cricket Shikhar Dhawan Virender Sehwag Alistair Brown Justin Ontong Sachin Ramesh Tendulkar Roelof van der Merwe
Get the latest updates on IPL Auction 2023 and check out  IPL 2023 and Live Cricket Score. Like us on Facebook or follow us on Twitter for more sports updates. You can also download the NDTV Cricket app for Android or iOS.