Shehan Madushanka became the fourth bowler in history to claim a hat-trick on debut as Sri Lanka crushed Bangladesh by 79 runs to win the tri-nation one-day international tournament in Dhaka. 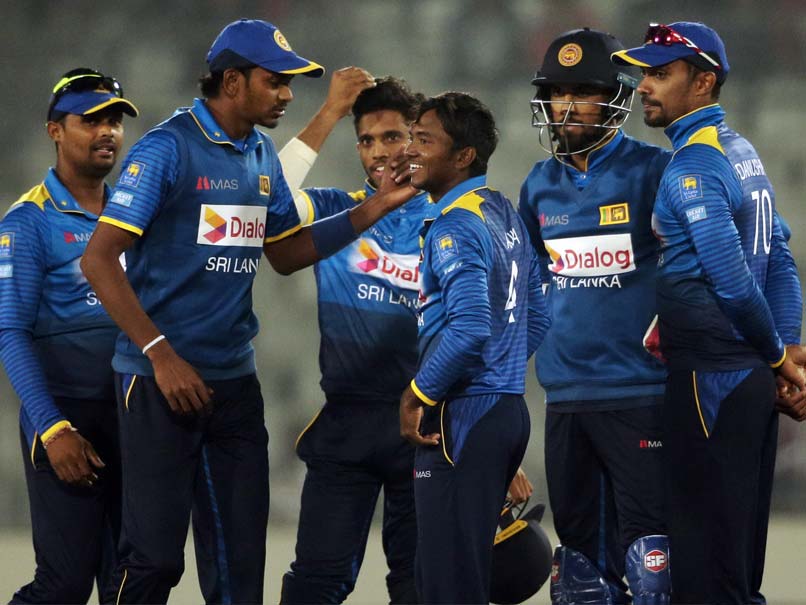 Sri Lanka celebrate after winning the match against Bangladesh.© AFP

Shehan Madushanka became the fourth bowler in history to claim a hat-trick on debut as Sri Lanka crushed Bangladesh by 79 runs to win the tri-nation one-day international tournament in Dhaka on Saturday. The 22-year-old pacer claimed Bangladesh's last three wickets before finishing with 3-26 as Sri Lanka defended their modest score of 221 runs by bowling out Bangladesh for 142 in 41.1 overs. Madushanka took the wickets of Rubel Hossain and Mashrafe Mortaza in the last two balls of his sixth over before he removed Mahmudullah Riyad in the next over to complete his hat-trick. He joined South Africa's Kagiso Rabada, Bangladesh's Taijul Islam and team-mate Wanidu Hasaranga who have also achieved the rare feat.

Mahmudullah staged a valiant fight for Bangladesh with 76 off 92 balls but he lacked support from other batsmen, who missed the batting of all-rounder Shakib Al Hasan due to a finger injury he suffered in the game.

"They had the plans and they executed well, and credit goes to everyone who played the series."

Bangladesh captain Mashrafe Mortaza refused to use Shakib's injury as an excuse.

"When he fell, we were sure he wouldn't be playing. We saw his hand. We knew it wasn't possible for him to bat. So we had asked the others not to think about it. I wouldn't use it as an excuse when chasing 220-odd runs," he said.

"Everyone is disappointed in the dressing room. We expected to win having come this far," he added.

Hossain, who returned with the figures of 4-46, was ably supported by fellow paceman Mustafizur Rahman (2-29) as the hosts made regular strikes after the visitors elected to bat first.

Sri Lanka will now play two Test matches against Bangladesh with the first Test beginning in the port city of Chittagong on January 31.

The Test series will follow two Twenty20 internationals between the two teams.

Comments
Topics mentioned in this article
Sri Lanka Cricket Team Bangladesh Cricket Team Cricket
Get the latest updates on IPL 2021, check out the IPL 2021 Schedule and Indian Premier League Live Score . Like us on Facebook or follow us on Twitter for more sports updates. You can also download the NDTV Cricket app for Android or iOS.