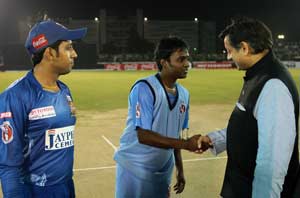 Union Minister Shashi Tharoor lashed out at Kerala Cricket Association (KCA) after the fourth day of the Duleep Trophy final between North Zone and South Zone was called off due to a wet ground following heavy rain, here on Sunday.

"KCA has brought disgrace to d state w/two major matches washed out. Who benefited from the Rs. 8 crore spent on drainage system," the Minister said in his tweet.

"Those who wish that KCA should not have a stadium of its own are trying to create controversy. We have not taken any amount from the Government for drainage work," he said.

"The Jawahar Lal Nehru International Stadium was not for cricket alone but for football matches also," he added.

The finals of the tournament have been affected since the past four days following rains. After the heavy rains last night, the pitch and outfield were wet following which today's match was abandoned.

The first and third day's play was also called off without a ball being bowled and with today, a total of 350 overs have been lost due to the bad weather and soggy conditions.

Comments
Topics mentioned in this article
KER Subramaniam Badrinath Ajinkya Rahane Cricket
Get the latest Cricket news, check out the India cricket schedule, Cricket live score . Like us on Facebook or follow us on Twitter for more sports updates. You can also download the NDTV Cricket app for Android or iOS.