Shane Watson is the all-time top run-scorer for Sydney Thunder in the Big Bash League (BBL). 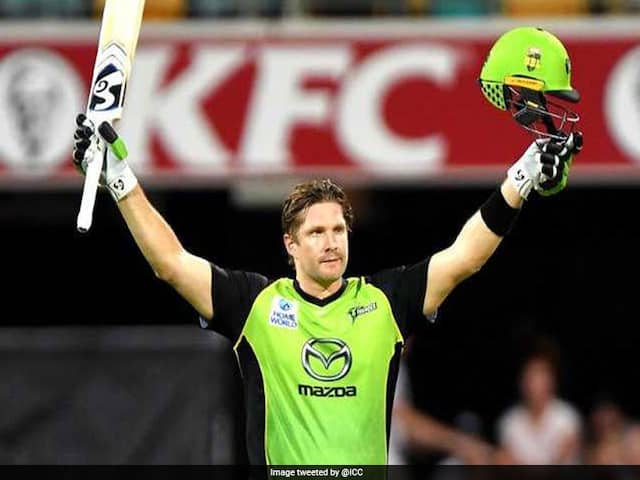 Shane Watson on Friday called time on his Big Bash League (BBL) stint but will continue to ply his trade in select tournaments around the world. The veteran all-rounder retired from Australia's Twenty20 tournament after stepping down as captain of the Sydney Thunder team. Watson, who is also the all-time top run-scorer for Sydney Thunder, quit BBL to spend more time with his family. "I have so many amazing memories that I will savour forever with the one standout being our (tournament) win in 2016," he said.

"To my teammates, I have played with so many great people and cricketers at the club and I sincerely wish everyone the absolute best for the upcoming seasons."

The 37-year-old, who quit international cricket in 2016, remains a force to be reckoned with despite his age.

Watson smacked a century from just 62 balls for the Thunder against the Brisbane Heat last season and hit 96 off 53 balls for the Chennai Super Kings in IPL 2019 this week.

"Shane Watson was one of the most exciting short-form players ever to grace a cricket field," he said.

"In a career which spanned almost two decades Shane made a major contribution to Australian cricket firstly at international level and then in domestic cricket as a significant contributor to the Big Bash.

"Talented, skillful and powerful, Shane was a devastating batsman at his best."

Watson played more than 700 international and domestic matches in total, scoring over 25,000 runs and claiming in excess of 600 wickets.

He is the only Sydney Thunder batsman to score more than a 1,000 runs and head coach Shane Bond called him "the ultimate professional".

"He cared about the team and the players and was hugely respected in the dressing room. We're really going to miss what he brings to the team and he will be a big loss." he said.