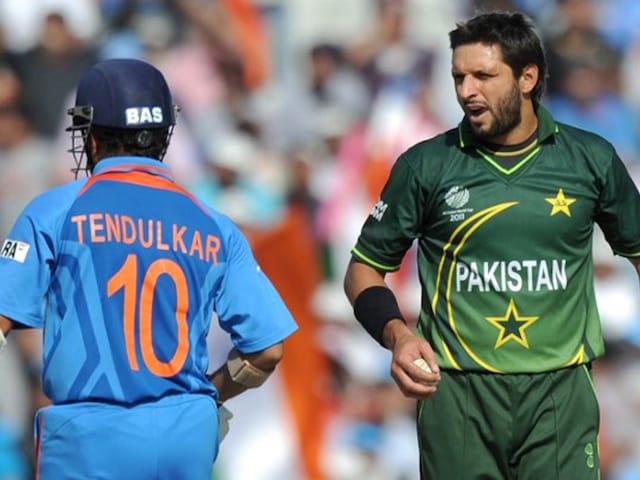 Hitting back at Shahid Afridi for his controversial comments on Kashmir, cricket icon Sachin Tendulkar on Wednesday said that "India can very well manage its internal affairs" while batsman Suresh Raina asked the former Pakistan captain to advise his country's army that it stops supporting extremists for maintaining peace in the Valley. In a surprise comment, Afridi on Tuesday expressed concerns about "worrisome" situation in Kashmir. "It is obvious that we have capable people to manage our country, run our country. No outsider needs to tell us what we need to do," said Tendulkar at an event in Mumbai.

Raina, who has roots in Kashmir, took to twitter to offer advise to Afridi.

"Kashmir is an integral part of India and will remain so always. Kashmir is the pious land where my forefathers were born. I hope @SAfridiOfficial bhai asks Pakistan Army to stop terrorism and proxy war in our Kashmir. We want peace, not bloodshed and violence," Raina wrote on the social networking site.

Kashmir is an integral part of India and will remain so always. Kashmir is the pious land where my forefathers were born. I hope @SAfridiOfficial bhai asks Pakistan Army to stop terrorism and proxy war in our Kashmir. We want peace, not bloodshed and violence. ??

India captain Virat Kohli said being an Indian, country's interest was paramount to him.

"As an Indian you want to express what is best for your nation and my interests are always for the benefit of our nation. If anything opposes it, I would never support it for sure," Kohli told reporters on the sidelines a training session at Chinnaswamy stadium in Bengaluru.

Former India player Mohammad Kaif said Afridi would not have made the comments had Pakistani cricketers were still playing in the Indian Premier League.

"'Paisa Bolta Hai'. Can't imagine Afridi making these comments if Pakistani players were still playing in the IPL. Rather, what's needed to be condemned foremost is the reason because of which Pakistani players are not allowed to play in the IPL - Infiltration from Pakistani terrorists and Pakistan's support to separatists," Kaif wrote on his Twitter handle.

"We wish peace and love but peace is a two way street," he added.

Dear Afridi , we wish peace and love but Peace is a two way street. pic.twitter.com/1oonVHQMqP

Former India captain Kapil Dev said that Afridi's comment does not even deserve a reaction.

Appalling and worrisome situation ongoing in the Indian Occupied Kashmir.Innocents being shot down by oppressive regime to clamp voice of self determination & independence. Wonder where is the @UN & other int bodies & why aren't they making efforts to stop this bloodshed?

"Dear Mr Afridi , since you want to see a peaceful JK sans any human rights violations could you please see to it that pak terrorists stop infiltrations n pak army stops supporting the separatists by closing down the training camps. It will greatly help in solving the problem," wrote the veteran artist.

Comments
Topics mentioned in this article
India Cricket Team Gautam Gambhir Shahid Afridi Suresh Raina Virat Kohli Kapil Dev Cricket
Get the latest Cricket news, check out the India cricket schedule, Cricket live score . Like us on Facebook or follow us on Twitter for more sports updates. You can also download the NDTV Cricket app for Android or iOS.