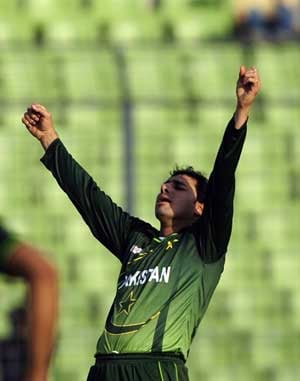 He is one of three Pakistani players who have signed to play in Australia's Twenty20 event, along with flamboyant allrounder Shahid Afridi and dashing young batsman Umar Akmal.

Ajmal is the leading wicket-taker in Twenty20 internationals, with 69 from 48 matches, seven ahead of Afridi, who is joining Sydney Thunder. He is also the world number on ODI bowler.

"I am really excited about playing for the Adelaide Strikers and really happy that I will get the chance to show my talent in the BBL (Big Bash League)," Ajmal said.

"I am very keen to meet up with the rest of the boys soon and play my best in the games that I am available, with the hope that Adelaide make the final stages and I can return to help win the competition."

But the Pakistani trio's participation in the Big Bash will be interrupted by their country's hotly-anticipated limited-overs tour to India -- the arch-rivals' first full series in five years.

Ajmal will be available for the Strikers' first match, against the Perth Scorchers on December 9, and is likely to return to play the remaining matches of the league after the India tour.

The 35-year-old's foxy bowling guided Pakistan to the semi-final of the World Twenty20 held in Sri Lanka last month, where he snared nine wickets in six games.

Akmal will play for Sydney Sixers and is expected to be available for the side's first three matches.

Comments
Topics mentioned in this article
Cricket Pakistan Cricket Team New Zealand Cricket Team Saeed Ajmal Australia Cricket Team
Get the latest Cricket news, check out the India cricket schedule, Cricket live score . Like us on Facebook or follow us on Twitter for more sports updates. You can also download the NDTV Cricket app for Android or iOS.