Latest reports in the Mail have once again brought the 'ghost' out in the open. Will we ever know? 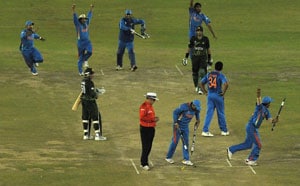 Claims made by a British journalist that the Indo-Pak 2011 cricket World Cup semi-final may have been fixed were on Saturday dismissed by leading Pakistan spinner Saeed Ajmal, who said this was being done to spoil the upcoming series.

Ajmal, who played in that match in Mohali in March, described the claims as "useless" and said both the teams fought hard in that match.

"I think these allegations are being made now to just spoil our coming tour to India. There is no substance to the story. I played in the semi final and I know how every player fought tooth and nail in it," he said reacting to a fresh claims by a sports-betting journalist that the match could have been fixed.

"But if there is any truth in that the match was fixed how come even after such a long time no one has been able to show any evidence. This issue is being raised again to derail our series in India," the off-spinner told the 'Duniya' news channel.

India and Pakistan are set to resume bilateral cricket ties after a gap of five years with a three-match ODI series and two Twenty20s in December-January.

The journalist has written in yet to be launched book that he got a message from an Indian bookie, who predicted the trend and pattern of the match, which India won.

British Tabloid 'Daily Mail' published extracts of the book in which the author raised doubts about the match merely because of the predictions of the bookie turned out to be fairly accurate.

The ICC had also earlier rejected the allegations which had surfaced shortly after the match.

The then ICC CEO Haroon Lorgat had said, "The ICC has no reason or evidence to require an investigation into this match. It is indeed sad for spurious claims to be made which only serve to cause doubt on the semi-final of one of the most successful ICC Cricket World Cups ever."

Meanwhile, the then PCB chief Ijaz Butt said he would like to see the PCB take up the issue with the ICC.

"I am no longer the Chairman and it is not right for me to say anything now but I think the current Chairman should take up this issue with the ICC," Butt told PTI.

"It is a fact that few weeks after the match was played they were lot of allegations made but nothing concrete came up from anywhere. Not even the ICC said anything about it," he added.

The current PCB Chairman Zaka Ashraf said he would not like to comment in the issue since he was not the chief at that time.

Comments
Topics mentioned in this article
Pakistan Cricket Team Cricket India Cricket Team Saeed Ajmal
Get the latest updates on IPL 2021, IPL Points Table , IPL Schedule 2021 , live score . Like us on Facebook or follow us on Twitter for more sports updates. You can also download the NDTV Cricket app for Android or iOS.