Sachin Tendulkar, who has announced his retirement from Test cricket, is a cricket aficionado's delight. From superstar Amitabh Bachchan to the ordinary man on the street, Tendulkar is a 'common' property cutting across caste, riches and creed. 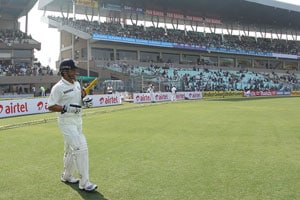 That cricket is a great leveller, Sachin Tendulkar's Test retirement has proved it. When the 40-year-old quit One-day Internationals last year, there was a decent outpouring of reactions but after Tendulkar announced his retirement from Test cricket on Thursday, cricket fans have rode on all platforms to express their feelings. From Amitabh Bachchan to Brian Lara to the common man on the street, Tendulkar's retirement evinced a reaction, a heartfelt one!. (Read: Sachin wants farewell Test at Wankhede, says MCA president Ravi Sawant)Â

Not for nothing is he is called the 'God' of cricket. He may himself feel embarrassed at such exaggerated 'tribute' but for a human being to combine cricketing excellence with incredible longevity, stay modest in spite of super stardom and inspire at least two generations of cricketers over 24 years is nothing short of being godly. Tendulkar is 'God' because his cricket has been pure, his approach to the sport has been divine and he is a role model. Tendulkar has been the quintessential guru, who guides one to cricketing salvation. Ask Rahul Dravid or a Yuvraj Singh. (Read: Sachin pips Bradman as best ever batsman in online polls)

On Thursday, after he smashed an unbeaten 77 off 35 balls to script a six-wicket win for India versus Australia in a T20 international in Rajkot, Yuvraj dedicated his effort to Tendulkar. Someone who believes immensely in holy men, Yuvraj's respect for Tendulkar is no less. "I don't think I am going to let him go away. I am going to catch hold of his feet and not (let him) leave the dressing room. It has been amazing to play with him for so many years," an emotional Yuvraj said in Rajkot. (Read: My hear stopped beating after hearing about Sachin's retirement: Amitabh Bachchan)

More importantly, Tendulkar was a 'common' property. He was hero to a billion Indians. He touched fans with his towering achievements and humility remained his prime virtue. "The way he conducts himself and handles fame and everything that goes with being Sachin is a great example for all sportsmen," Australian leg-spin great Shane Warne wrote in his book "Shane Warne's century". The only hint of arrogance came when he batted against the best of international bowlers. The father of two was otherwise the 'common' man who knew how to balance the ups and downs of life.

Here are a selection of (unedited) reactions from Sachin's fans:

The day I dreaded has finally arrived. I know this was expected, this was due, so on and so forth. But, just like you would like your loved ones to stay with you as long as possible, whatever be their age, physical condition etc; I could never think of an Indian outfit with the thought that Sachin Tendulkar will never been seen again among the bunch of 11. I grew up watching you, I drew my inspiration from you, maybe the whole young generation of India in the 90's did so, TV's were switched off when you got out because there was no hope after you. Hope started and ended with you. But now, some young men from that generation is dawning the Indian colors. Perhaps there is a Sachin Tendulkar hidden in every young Indian cricketer and that's why there is hope elsewhere in cricketers other than Sachin. You have given us enormous joy over the years, you have given us the addiction of cricket and this addiction will probably change forever with your retirement. 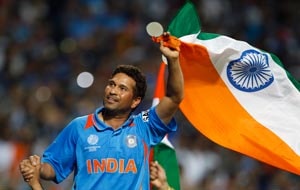 Jitin Chawla - New Delhi, India
No Achievement is small, no achievement is big but what you have achieved is a Landmark!! GOD of Cricket..India salutes you..

Upkar Yadav - Works at Cognizant Technology Solutions
This is utmost emotional moment for me.I can't simply believe this.The Master's been,for 24 years,serving the nation with perseverance.He should have been allowed to play as long as he want.I recall him saying lately that a plenty of cricket left in him - how come this all of a sudden announcement. BCCI doubted his ability I doubt theirs.

Ganesan - Tagore Arts College, Pondicherry
Better late than never. He should have gracefully retired from all forms of cricket atleast 2 years ago. A legend spoiled his own reputation by his selfish attitude for records. For me he will always be a selfish player whatever he achieved.

Vijay Raghavan - Project Scientist at The National Institute of Ocean Technology (NIOT)
End of an era!!! No, that's not right!! It's end of an yuga for me !! WHAAAADAPLAAYAAAA!!!!

This is definitely one of the moments that left me perplexed for a while. Cricket's greatest artist has decided to take his boots off. I know this was coming someday and finally it has. He started playing the year I was born and I have grown seeing you bat. You have inspired a generation and I feel proud to be a part of your era. This is going to take sometime for me to digest this. The adulation and the aura he has created all through these years is simply amazing and its impossible to be reinstated by someone else. Not just for the innumerable number of records , but for the kind of human he is, this is the biggest loss for Indian cricket indeed. He is the epitome of batsmenship and he has been the ever growing kid with the same hunger he had 2 decades back. He was the man who made me watch the game and I know the game by him!!! And now cricket is just going to be a mere battle of business. Well, he is now all set to take up the bigger roles in Indian cricket.

My greatest hero has finally called a day!! For me, he will ever be the face of Indian cricket !!!

Thanks Sachin.. Thanks for all the cherishable memories.. All my prayers and wishes to the little big god of Indian sports entertaintment!!!

Amit Shelar - University of Mumbai
Dear Sachin, seeing & following you for last 24 years now and I wonder how cricket will be without you in action. You have been an institution in itself not only for cricket but for also how a person needs to live. So big , so strong yet so humble and yet you terrorized every bowler of your era and I am sure it will be an emotional moment for them as well that you plan to quit. I can only curse myself that my son wont be able to see you playing live and will not be that fortunate as me. Every parent in this country will want to have a son like you.This nation has given birth to some of the finest sportsmen but one son mother india will always remember is SACHIN RAMESH TENDULKAR. Thank you for all the lovely memories, for all those majestic straight & cover drives , for all those towering sixes , for all those unforgettable times. You were a sole reason for many to live. Dear Sachin, closing it with a tear, a hug & a salute. We will miss you forever. Thank you......

Gunjan Bidasaria - Tolani Institute of Management Studies
Hey Sachin, I don't comment on news articles generally but this is a moment when I must. Thank you for inspiring a generation of people like me. (No, I am not in cricket). You have shortfalls which I understand. But for a generation who would remain glued to the tv set because you inspired hope in an otherwise timid performance of my cricket team, here's a 21 gun salute to you. You remain to be our hero & an inspiration for a generation of us. Thank you for being there and trying to live up to our expectations.


Ghilli Karthick
Shocks after Shocks really don't know how to Express it.. First ODI next IPL and T20 and Now Tests? Not this Early Sachin :( Even if i be depressed for any reason his batting would be the best medicine which would make me normal but when i Realize after Nov 18th i don't get that.. It Hurts.. Actually its Cricket which is Gonna Retire after Nov 18th.. Cricket will no more be a Religion in India the God we worship Vacates the Temple.. RIP Cricket.. Cricket can never be the same without him


Mk Ibrahim
Now there will be no more special programs on TV with cricket experts about Sachin's Retirement. Here comes the moment. No matter how good you play, age factor doesn't allow you continue to do so. Tendulkar had 24 yrs of Int'l cricket and almost every record to his name. Well done and Thank you Sachin for making us proud all over the world, we will miss you! My fav Sachin moment "Straight down the ground for a SIX to Warne in Sharjah 1998"

Basanta Kumar Mahalik - Puduchcheri, Puducherry, India
This is what Sachin is all about. The same people who wanted him retired, now would feel his absence. Great personality indeed.

Anand KV - Manager Engineering at Fives India Engg, Chennai
My whole youth timeline was occupied by Sachin... !!!
Many of my friends are due to my interest towards Cricket!

Many of my arguments with Friends in the past were about who is better ? Sachin or Azhar?..Sachin or Lara? Sachin or Ponting..? Sachin or Kallis?

How many leaves I've taken to watch you at Chepauk?
How many times I wanted first two wickets to fall in a hurry to see you batting?
How many hours I spent seeing ICC tour plan to note down India's cricket schedule - rather your playing schedule?

Dear Sachin,
My Cricket interest blossomed with you..!!!
Without you, Cricket is not the same for me...

All along I was fearing for this day only..! sincerely inside I wished that this day will never come though I knew it'll come eventually!!!

one of your inconsolable fan!!!

Comments
Topics mentioned in this article
Cricket Sreesanth Sachin Ramesh Tendulkar India Cricket Team
Get the latest updates on ICC T20 Worldcup 2022 and CWG 2022 check out the Schedule, Live Score and Medals Tally. Like us on Facebook or follow us on Twitter for more sports updates. You can also download the NDTV Cricket app for Android or iOS.