Sachin Tendulkar, who is going to retire from Test cricket after his 200th match, wants his mother to be present during the milestone game, according to media reports. When his father passed away in 1999, it was his mother who helped Tendulkar regain focus on cricket again! 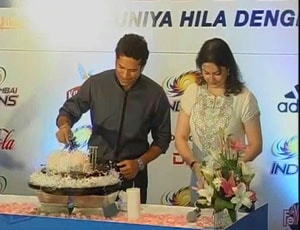 For sportspersons who plan their retirement after long and successful careers, having the family and close friends around on the final moments of their career is a rather common phenomenon. Several Australian cricketers like Mathew Hayden, Adam Gilchrist and Ricky Ponting have done this but an Indian doing it is rather rare. But Sachin Tendulkar, who has decided to retire from Test cricket after he plays his 200th Test match in November, wants his family and more importantly, his mother Rajni by his side when he bows out from international cricket.

According to a report in the Times of India, 40-year-old Tendulkar, who announced his retirement on Thursday, wants his mother to be present in his last Test match scheduled against the West Indies. Although the Board of Control for Cricket in India has not announced the venue of this milestone game, Tendulkar is keen to play at Mumbai. While Wankhede Stadium has been Mumbai's regular international venue in recent years, the Brabourne Stadium, run by the historic Cricket Club of India, also wants to host. (Read full story here)

Tendulkar's mother has apparently never seen her son play international cricket in a stadium. Although his mother now needs a wheelchair to move around, Tendulkar is keen that she turns up at his farewell game. Needing two Test matches to reach the 'magic' figure of 200, Tendulkar has already written to the BCCI about his wish, says the newspaper report. The BCCI is expected to name the Test venue next week. Kolkata's Eden Gardens could host Tendulkar's 199th Test although Ahmedabad and Bangalore are also in fray as per Board's rotation policy. (Also read: Sachin's attention to every detail was amazing, says Greg Chappell)

To have his mother witnessing his farewell game will indeed be special for Tendulkar. His wife, Anjali, has been seen with him on several tours and big occasions but the idea to invite his mother shows Tendulkar's love and respect for his family. Looking skywards and thanking the Almighty after every milestone has been a Tendulkar trademark. This has been a way to remember his late father, who initiated Tendulkar to play the game seriously.

Tendulkar's father, noted Marathi literary figure Prof Ramesh Tendulkar, passed away in May 1999 following a massive heart attack. He was 65. After the death of his first wife, Professor Tendulkar had married her younger sister, Sachin's mother, Rajni. When his father passed away, Tendulkar was playing at the World Cup in England. Just before the game against Zimbabwe, Tendulkar had rushed back from Leicester to attend his father's funeral. (Felt my heart beat stop on hearing Sachin's retirement, says Big B)

In spite of a 24-year-long career, Tendulkar's mother has never seen her son play an international game. During a public ceremony in Mumbai on January 26, 2011, an emotional Tendulkar had revealed his father's death was one of the "toughest" phase of his life and that it was his mother who helped him focus on cricket again. Interestingly, Tendulkar's mother, who belonged to a traditional Maharashtrian family, never knew about cricket till she married Professor Ramesh Tendulkar.

"That was the most difficult stage of my life. At that moment my mom said that even my father would have wanted me to go back and play (the World Cup) because if I sat back at home then it would possibly be the worst thing. You have to go and play for your country because that is the most important thing, and that made me strong. That support meant a lot because it was a very difficult moment for our entire family and to go and play a cricket match after just three days was not easy," Tendulkar had said. Despite the personal tragedy, Tendulkar even scored a century against Kenya! (Glad he is retiring after 200 Tests, says Geoffrey Boycott)

Many times, Rajni Tendulkar has seen Sachin in action only on TV highlights, but to have her turn up on D-Day will be the perfect way to say: "Mother, thank you for making me what you are." With 50,000-plus runs in international cricket, Tendulkar possesses almost every batting record one can think of. This is the time to reflect on the sacrifices made by his family and count the blessings of his parents!