Sachin Tendulkar, who has announced his Test retirement, had expressed his desire to play his 200th Test at Wankhede, a venue close to his heart since his younger days. His mother, Rajni, is expected to be present in this milestone game. 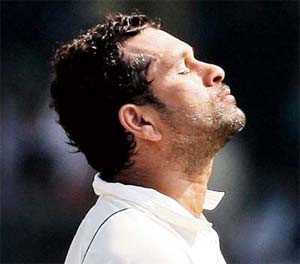 Sachin Tendulkar will play his farewell 200th Test at the Wankhede Stadium. The Board of Control for Cricket in India on Tuesday said that the second match of the two-Test series against West Indies in November will be played at the cricketer's home ground. The match is scheduled from November 14 to 18.

While there were several venues vying for the privilege to host Tendulkar in his final appearance for Team India, Wankhede was always seen as a frontrunner due to sentimental reasons. The BCCI's Programmes and Fixtures committee, headed by Rajiv Shukla, met on Tuesday to chalk out the detailed schedule of the hastily-arranged series comprising two Tests and three one-dayers.

Shukla said that the committee decided to grant Tendulkar's wish to play his last Test - he officially announced his plans to retire last Thursday - at the venue where he made his debut in first class cricket -- the Wankhede Stadium.

He only made one international appearance in the shortest form of the game, scoring 12 from 15 balls against South Africa in December 2006

Tendulkar has also expressed his strong desire to have his mother watch him play in his final Test match. In spite of a 24-year-long career, his mother has never seen her son play an international game in a stadium - another privilege for Wankhede now that she is expected to be present.

The Eden Gardens in Kolkata will host the opening clash of the series (November 6-10) and like Wankhede, gets an 'out-of-turn' Test as according to the BCCI's rotational policy, it was actually Bangalore and Ahmedabad's turn to host. (Also read: Teenage Tendulkar's first interview before joining Team India)

The itinerary of the series between India and the West Indies is as follows:

Comments
Topics mentioned in this article
Cricket Eden Gardens Wankhede Sachin Ramesh Tendulkar
Get the latest updates on ICC T20 Worldcup 2022 and CWG 2022 check out the Schedule, Live Score and Medals Tally. Like us on Facebook or follow us on Twitter for more sports updates. You can also download the NDTV Cricket app for Android or iOS.