Former Australian opener Mathew Hayden has expressed his displeasure over Sachin Tendulkar being awarded the prestigious 'Order of Australia' and said the Indian batsman did not deserve the honour. 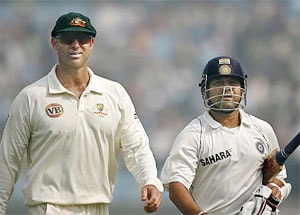 Former Australian opener Mathew Hayden has expressed his displeasure over Sachin Tendulkar being awarded the prestigious 'Order of Australia' and said the Indian batsman did not deserve the honour.

In an interview to an Australian Radio show, Hayden said: "I think the honour should be exclusive to Australians. There are things that are sacred amongst our country. I understand the point that he is an iconic figure. If Sachin was living in Australia - give him the Prime Minister's gong I reckon - but the reality of it is he's living in India."

There has been uproar in Australia since their Prime Minister Julia Gillard announced that the legendary cricketer will be honoured with the membership of 'Order of Australia'. Many Australians questioned Sachin's role in the Monkeygate scandal in 2008 following the suspension of Harbhajan Singh for racially abusing Andrew Symonds during the Sydney Test.

However, Gillard said Sachin is as admired in Australia as he is in India. (Also read: How Sachin can break Gavaskar's domestic record)Â

"At the start of this year it was my pleasure to host the Australian and Indian cricket teams at my Sydney residence. The summer was a celebration of the game and of the ties it has created between our two peoples," she said.

"And many Australians gathered for what could be their final sight of Sachin Tendulkar in Tests. Tendulkar is almost as widely admired in Australia as he is here in his homeland," she said.

"... we are delighted that he has accepted an honour from the Australian people, Member of the Order of Australia," she added.

The 'Order of Australia' is an order of chivalry to recognise Australian citizens and other persons for achievement or for meritorious service. The 39-year-old Tendulkar will be awarded an AM, which is one of the six grades in the Order of Australia.

Tendulkar, who is also a Rajya Sabha MP, will become only the second Indian after former Attorney General Soli Sorabjee and the first sportsperson from the country to get the honour.

Comments
Topics mentioned in this article
Cricket Matthew Hayden MT Webber Australia Cricket Team Sachin Ramesh Tendulkar
Get the latest updates on SA vs IND 2021-22, check out the Schedule and Live Score . Like us on Facebook or follow us on Twitter for more sports updates. You can also download the NDTV Cricket app for Android or iOS.