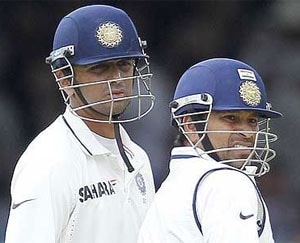 Sachin Tendulkar was voted as the greatest batsman of all time, ahead of Don Bradman and Brian Lara, in an online poll conducted by an English newspaper after the news of the Indian batting icon's retirement from Test cricket broke out on Thursday.

The newspaper though said that Tendulkar might have gathered more runs and centuries in Test cricket than any other player, but he could not make it to the top 10 of ICC's career-best ranking system, whose complex algorithm ranks players by their achievements at the height of their form.

Comments
Topics mentioned in this article
Cricket Sachin Ramesh Tendulkar Donald George Bradman Rahul Dravid
Get the latest updates on ICC T20 Worldcup 2022 and CWG 2022 check out the Schedule, Live Score and Medals Tally. Like us on Facebook or follow us on Twitter for more sports updates. You can also download the NDTV Cricket app for Android or iOS.