At the age of 11, Sachin Tendulkar had played his first Giles Shield match against Khoja Khan School at Azad Maidan, scoring 24 runs. A year later, he scored a century for his school in the U-17 Harris Shield. 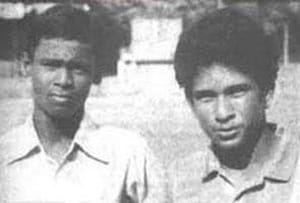 Retiring batsman Sachin Tendulkar was on Tuesday approached to become the brand ambassador of Harris and Giles Shield by the organisers of the school-level cricket tournament. (Read: Sachin should have retired after 2011 World Cup, says Vinod Kambli)

Tendulkar, who has announced his retirement from Test cricket after his landmark 200th and final Test at the Wankhede stadium next month, was involved in a record-breaking 664-run partnership with Vinod Kambli in 1988 in the semi-finals of The Harris Shield Tournament, an inter-school competition.

According to Mumbai School Sports Association president Father Jude Rodrigues, Tendulkar has almost given his nod to the proposal.

"Sachin and Kambli had scored almost 700 runs and broke the Harris and Shield record and that has remained history for us," Rodrigues said.

"The basic discussion was that we have invited him to be the brand ambassador of Harris and Shield and he has almost 99 per cent accepted the invitation.

"He was also enthused that okay, now that I have put down my bat, if something can be done at the grassroot level. We are really grateful to be associated with such a personality," he added.

At the age of 11, Tendulkar had played his first Giles Shield match against Khoja Khan School at Azad Maidan, scoring 24 runs. A year later, he scored a century for his school in the U-17 Harris Shield.

Tendulkar had a dream run in Giles Shield, scoring seven centuries, including a double ton, when he was just 13 years old and the landmark partnership with Kambli came in the following year in February, 1988.

In that partnership, Tendulkar had scored 326, while Kambi contributed 349 runs before their coach Ramakant Achrekar forced the pair to declare.

Comments
Topics mentioned in this article
Cricket Sachin Ramesh Tendulkar Vinod Ganpat Kambli
Get the latest updates on ICC T20 Worldcup 2022 and CWG 2022 check out the Schedule, Live Score and Medals Tally. Like us on Facebook or follow us on Twitter for more sports updates. You can also download the NDTV Cricket app for Android or iOS.