Sachin Tendulkar's heart must have told him it's time to quit: Rahul Dravid

Prolonging his career and touring South Africa or England would have been counter-productive for Sachin Tendulkar, feels Dravid. 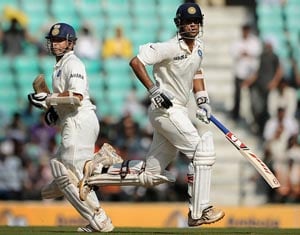 Sachin Tendulkar's decision to quit Test cricket at the end of his 200th match next month has caught former teammate Rahul Dravid by surprise. The two legends of Indian cricket had met each other during the Champions League T20 final at Delhi's Feroz Shah Kotla on Sunday and Dravid admits "he had no inkling that Sachin was going to quit Tests."

In an interview to a cricket website, Dravid said: "There were indications that he would finish, but that he would end with the Tests against the West Indies, I had no inkling." Dravid, himself retired from international cricket in March 2012 but continued to play T20 cricket for his franchise Rajasthan Royals. On Sunday, he played his last competitive match against Tendulkar's Mumbai Indians, the Champions League winners.

Tendulkar's Test form had become a topic of much debate in recent times. His poor run with the bat - Tendulkar hadn't scored a Test hundred since January 2011 - had raised doubts about his ability to produce the goods for India at a time when a clutch of talented kids were knocking on the Test door. When he quit ODI cricket in December last year, it was clear that Tendulkar wanted to prolong his Test career. But cricket can be cruel because at the end of the day, it's the number of runs that matter and by Tendulkar's lofty standards -- 15837 runs at an average of 53.86 - he was finding it difficult to match the rhythm he was known for. (Also read: Cricketers, both past and present, pay tribute)

Dravid feels age caught up with a genius who was known for his perfect timing and anticipation. In his last 25 Test innings, Tendulkar has been bowled eight times and caught leg before wicket on five occasions. A man who was known for amazing sense of feet movement and positioning, the nature of these dismissals only provided fodder to his critics. In a period when every movement of a cricketer is video analysed with clinical precision, it was only logical that Tendulkar's 24-year-old career was captured and canned frame-by-frame by the opposition. In recent times, it was easy to find and capitalize on the odd glitch in his virtually error-free batting style. (Read: Sachin pips Bradman as best ever batsman in online polls)

"For someone who is 40, you would expect him to walk away. He said in his letter (to the BCCI) that he lived cricket and I think the 200th Test will be the perfect time to leave. It's difficult to give up what you do all your life but he would have listened to his heart and Sachin seems comfortable with it. It's difficult to say how you arrive at these decisions, but just that you feel the timing is right," Dravid told ESPNCricinfo. 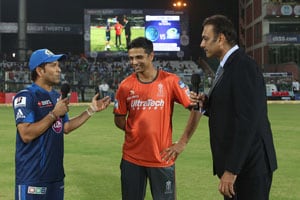 As speculation around his retirement grew in recent weeks, several of Tendulkar's admirers wanted him to prolong his career and even reproduce his magic on seaming wickets in South Africa and England. Former Indian captain and a staunch Tendulkar 'ally' Ravi Shastri wanted Tendulkar to play in England next summer. But as they say, discretion is the better part of valour and Tendulkar probably played a masterstroke by choosing the right time to quit. (Pakistanis bow down to 'God' of cricket)

"There is no end to such things like facing a Steyn-Morkel or an Anderson-Swann for the last time. Things don't work like that. When your heart is not ready for anything, when your passion and energy is not up to it, then it becomes tough. Sachin obviously listened to his heart," explains Dravid.

Unlike Sourav Ganguly, one of the pillars of India's 'Fantastic Four', Dravid feels Tendulkar's presence will be missed in the dressing room. How will an Indian cricketer miss a Tendulkar? "With Tendulkar, you lose an inspiration, the opportunity to share a dressing room with a living legend," added Dravid.

Dravid reckons Tendulkar inspired a whole generation of cricketers, including him. "Getting into the dressing room with Tendulkar and putting your kit bag next to Sachin's meant something. He has left a legacy in the dressing room and there are those 19-20-year olds now in the team who will play for another 10-12 years and carry that legacy forward. That will be the best way to pay your tribute to him," said Dravid. (Sachin greatest contemporary cricketer: Australian media)

It's going an emotional month for Indian cricket. While the world pours its emotions on him, Tendulkar will be back to business as he shall ready himself for the two Tests against the Caribbeans next month. For a man always driven by passion and the hunger for excellence, India will pray that 'Bradmanesque' Tendulkar stamps his authority like a true superstar bringing the curtains down on one of the longest cricket shows on earth!

Comments
Topics mentioned in this article
Rahul Dravid Sachin Ramesh Tendulkar Cricket
Get the latest updates on ICC T20 Worldcup 2022 and CWG 2022 check out the Schedule, Live Score and Medals Tally. Like us on Facebook or follow us on Twitter for more sports updates. You can also download the NDTV Cricket app for Android or iOS.