It's Always a Special Feeling to be Back at Lord's: Sachin Tendulkar

Exactly six months and 18 days after he retired, Sachin Tendulkar will once again step out in whites at Lord's. He will be leading the MCC XI against Shane Warne-led World XI in a bi-centenary celebrations match. 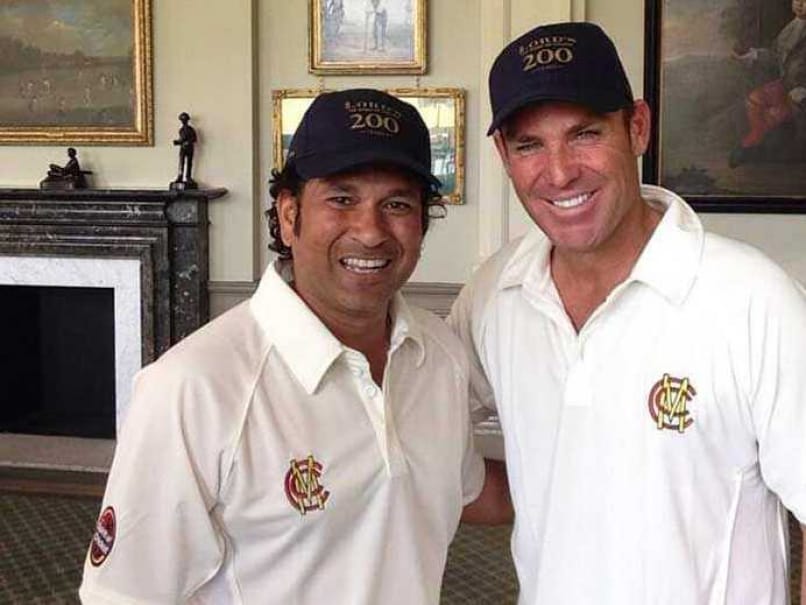 Sachin Tendulkar and Shane Warne pose together ahead of their clash at Lord's. (Image credit: Lord's Ground@HomeOfCricket)© Twitter
London:

Exactly six months and 18 days after he had called time on his illustrious career, Sachin Tendulkar will once again step out in white flannels on the hallowed Lord's turf leading the MCC XI against Shane Warne-led World XI in a bi-centenary celebrations match here on Saturday. (More pics here)

By his own admission, the world's highest run-getter in both Tests and ODIs has been enjoying the retired life and is still to find the "centre of the bat" during the practice sessions for the past 10 days.

"I have enjoyed my time with the family. I started practising 10 days ago and it is nice to be back in the gear and hitting a few balls. I'm still trying to find the centre of the bat," a smiling Tendulkar told the mediapersons during a pre-match conference at the Lord's ahead of the match.

Asked if he has missed being in action, Tendulkar replied,"I have been watching but I haven't been feeling like getting in the net."

Saturday's exhibition one-day game celebrates the 200th anniversary of the 'Home of Cricket'.

Tendulkar, who first came to Lord's as a teenager, fondly recollected,"It is always a special feeling, whenever I come here it is special -- the crowd and the atmosphere is fantastic, no matter how many times you come here."

He added he was looking forward to tomorrow's match where he will be playing alongside his long-time teammate Rahul Dravid, the legendary Brian Lara and Australian pace great Brett Lee. Warne's Rest of the World team comprises of Adam Gilchrist, Muttiah Muralitharan and Shahid Afridi.

"The idea is to celebrate the occasion and give something special to the spectators, compete in the right spirit and compete as hard as possible," Tendulkar said.

"He is a superstar and a wonderful player. He is fantastic to watch and I'm sure he will turn it on on Saturday and smash it all over the park. He has played well over the years at Lord's in his time with England and hopefully he can do that on Saturday." (Sachin, Lara to Play Together at Lord's)

When questioned about his take on captaincy, Warne said,"I think you can always improve as a player and as a captain, some people are naturally a leader and some people it doesn't suit them.

"Ask Ian Botham, one of the best all-time cricketers but he always said captaincy wasn't for him," added Warne in a reference to the all-rounder's unsuccessful spell as England captain in the early 1980s. (KP is a Match-Winner: Warne)

"You can improve but you are either a leader or you are not and if you are not a leader and you try to force something it doesn't really work."

Comments
Topics mentioned in this article
Sachin Ramesh Tendulkar Cricket
Get the latest updates on ICC Women's Cricket World Cup 2022 and IPL 2022, check out the Schedule , Live Score and IPL Points Table. Like us on Facebook or follow us on Twitter for more sports updates. You can also download the NDTV Cricket app for Android or iOS.