SA vs SL: Dinesh Chandimal said Sri Lanka had exceeded their expectations by scoring 340/6 on the opening day of the first Test against South Africa in Centurion on Saturday. 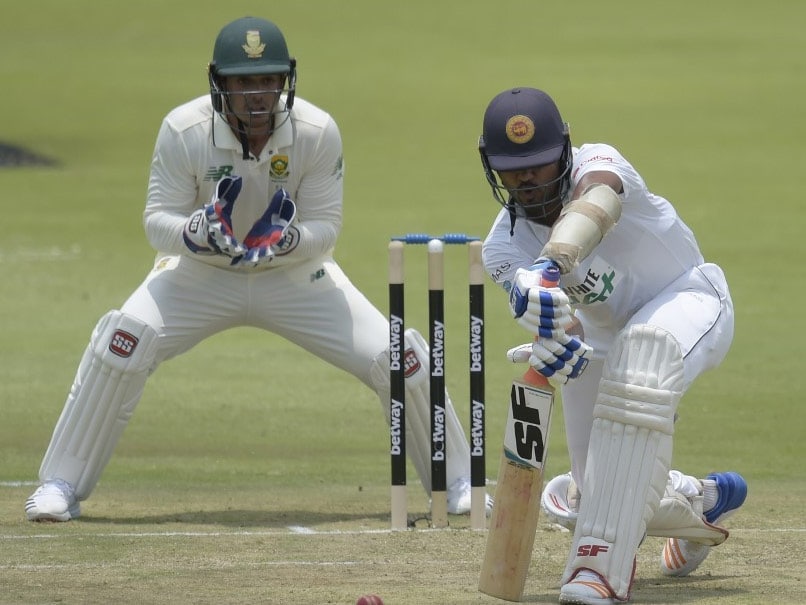 Former captain Dinesh Chandimal said Sri Lankahad exceeded their expectations by scoring 340/6 on the first day of the first Test against South Africa in Centurion on Saturday. Chandimal and Dhananjaya de Silva were mainly responsible for putting the tourists in a strong position, scoring 85 and 79 respectively -- but De Silva had to retire hurt after what appeared to be a hip injury which could keep him out of the rest of the match.

"To be honest we were thinking 280-plus would be a good first innings score so this is surprising everyone in our team," said Chandimal.

"As a team we have got great confidence after today's play. We are looking forward to put them under pressure tomorrow if we can score another 30 or 40 runs."

Chandimal said a chat with former South African batting great Hashim Amla on his previous visit to South Africa in 2016 had helped him prepare to deal with the bounce and pace of pitches there.

Amla, watching the interview in his capacity as a commentator for SuperSport television, said he had not passed on any great secrets. "It was basic stuff," said Amla. "He batted very well today, he left well and he judged the length well."

Chandimal praised De Silva, who was the dominant partner in a stand of 131 which enabled Sri Lanka to recover from 54 for three on a pitch which had good bounce and offered sideways movement to the seam bowlers.

"He batted outstandingly. He is a really cool-minded guy," said Chandimal.

But Chandimal said De Silva was concerned that his injury could keep him out of action for two or three weeks, which would rule him out of the rest of the two-match series.

"He is having an MRI scan now. We'll see how that goes and hopefully he recovers soon," said Chandimal.

De Silva pulled up while running between wickets and was taken off the field on a motorised stretcher.

De Silva played some flowing strokes in hitting 11 fours and a six off 105 balls, while Chandimal played an anchor role, reaching his half-century off 116 balls in the last over before tea.

Chandimal and Niroshan Dickwella (49) added another 99 runs before South Africa finally claimed a fourth wicket when Chandimal was caught at slip when he gloved a ball from all-rounder Wiaan Mulder which kicked off a length. Chandimal hit 11 fours in his 161-ball innings.

The medium-paced Mulder was South Africa's most consistent bowler and finished the day with three wickets for 68 runs.

South Africa were fielding their most inexperienced fast bowling attack since 1993, with Lungi Ngidi, Anrich Nortje, debutant Lutho Sipamla and Mulder having just 12 caps and 35 wickets between them.

Despite helpful conditions, the bowlers struggled to find consistency, with Sipamla leaking 28 runs in three overs with the new ball. Sipamla was playing ahead of the uncapped Glenton Stuurman, who had been expected to play but was judged not to have recovered fully from a thigh injury.

"There was a lot of movement," said Mulder. "We could have bowled a little bit fuller. I just tried to keep it simple, bowling at the top of off-stump."

Dhananjaya de Silva Niroshan Dickwella SuperSport Park, Centurion Cricket South Africa vs Sri Lanka, 1st Test
Get the latest updates on ICC Women's Cricket World Cup 2022 and IPL 2022, check out the Schedule , Live Score and IPL Points Table. Like us on Facebook or follow us on Twitter for more sports updates. You can also download the NDTV Cricket app for Android or iOS.