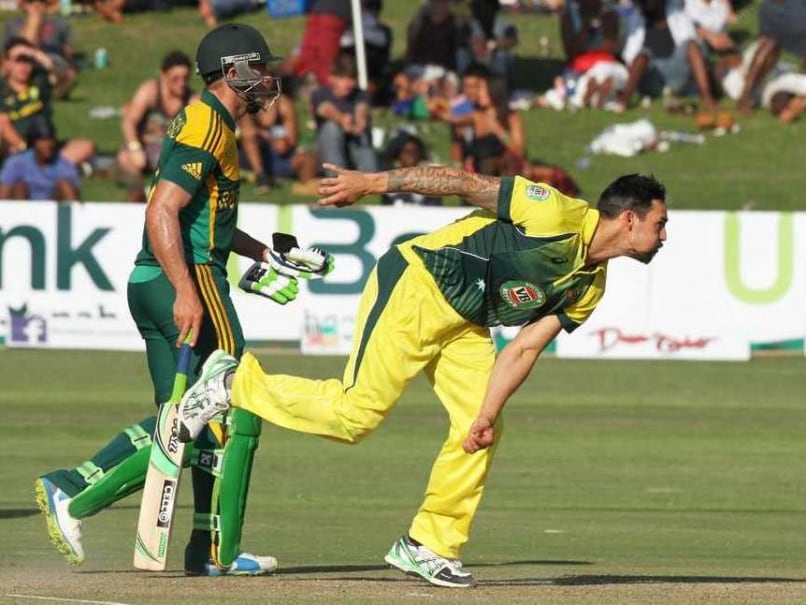 Australia paceman Mitchell Johnson is continuing his fearsome reputation ahead of the next Ashes series after breaking a South African batsman's arm during the ongoing one-day tri-series in Zimbabwe.

Johnson's lifting delivery in Australia's ODI victory in Harare -- Zimbabwe -- struck the left-hander squarely on the arm but, astonishingly, McLaren didn't even flinch.

"The scans revealed a hairline fracture to the bone in the right forearm, which rules him out of action for the next three weeks."

It was the second time in six months that a Johnson bowl has resulted in McLaren having to see medics.

In February's first Test against the Australians at Centurion, McLaren felt Johnson's wrath when he received a menacing blow to the side of his helmet.

The delivery left McLaren bleeding from the ear and the 31-year-old was admitted to hospital the next day and played no further part in the series.

Left-armer Johnson was one of the stars during the Ashes sweep, with 37 wickets at 13.97, but he was also the subject of a sledging controversy over a "broken arm" threat.

Australia captain Michael Clarke was fined after being caught on the stump microphone telling England's James Anderson to "get ready for a broken fucking arm" when Johnson was charging into bowl.

During Tuesday's ODI against the Proteas, Johnson again displayed his fearsome bowling when he blasted two stumps out of the ground with David Miller at the crease.

His performances against South Africa and Zimbabwe in the tri-series have given him confidence going into next month's tour against Pakistan in the United Arab Emirates, where the pitches are soft.

"It makes you feel good about yourself and gives you that confidence," Johnson said.

"I probably haven't performed at my best on the slower wickets. And I've challenged myself... it was on my mind for this tournament," he added.

"It's good preparation to get these wickets here and keep improving as a player.

"Like most guys you're looking towards the Ashes and the World Cup -- they're the big tournaments you want to play."

Comments
Topics mentioned in this article
Ryan McLaren Mitchell Johnson South Africa Cricket Team Australia Cricket Team Zimbabwe Cricket Team Cricket
Get the latest updates on IPL Auction 2023 and check out  IPL 2023 and Live Cricket Score. Like us on Facebook or follow us on Twitter for more sports updates. You can also download the NDTV Cricket app for Android or iOS.